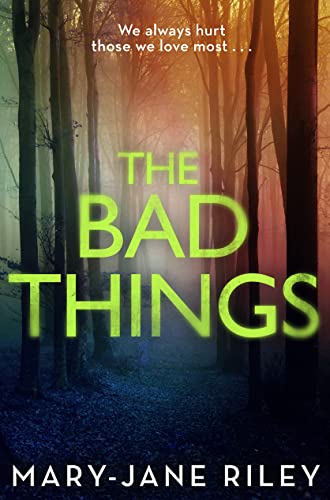 The Bad Things by Mary-Jane Riley

Book one in a darkly compelling psychological thriller series, full of twists and turns, perfect for fans of SISTER SISTER by Sue Fortin and INTO THE WATER by Paula Hawkins.

Book one in a darkly compelling psychological thriller series, full of twists and turns, perfect for fans of SISTER SISTER by Sue Fortin and INTO THE WATER by Paula Hawkins.

We all have our secrets, some are just darker than others.

Now Jackie Wood, jailed as an accessory to the twins' murder, has been released, her conviction quashed by the Appeal Court. Convinced Jackie can reveal where Millie is buried, Alex goes to meet her.

But the unexpected information Wood reveals shocks Alex to the core and threatens to uncover the dark secret she has managed to keep under wraps for the past fifteen years. Because in the end, can we ever really know what is in the hearts of those closest to us?

'A brilliant debut novel ... The complex, fascinating plot winds between two time zones as the heroine seeks to uncover the cause of a terrible family tragedy. Riley's real gift lies in her creation of one hundred percent real characters' Kate Rhodes, author of RIVER OF SOULS

'A dark tale set in a familiar world. Riley's characters are unexpected and yet completely believable and this sinister and twisty tale will definitely stay with the reader for a long time.' Valentina Giambanco, author of THE GIFT OF DARKNESS

This book is brilliant ... a read to be devoured. A twisty tale with a tense psychological plot ... fresh, original and thrilling' Tracy Shepherd, Postcard Reviews.

Mary-Jane Riley spent many years as a BBC journalist and talk show broadcaster, covering some of the darker stories of the last decade, including the Suffolk prostitute murders, the Cambridgeshire serial killer Joanna Dennehy and Operation Endeavour, the police operation to trap illegal gangmasters in the Fens. She has had short stories published in women's magazines, including Bella, Women's Weekly and That's Life. Mary-Jane Riley is married with three children and lives in rural Suffolk. The Bad Things is her first novel.

GOR007222162
9780008153786
0008153787
The Bad Things (Alex Devlin, Book 1) by Mary-Jane Riley
Mary-Jane Riley
Alex Devlin
Used - Very Good
Paperback
HarperCollins Publishers
2015-10-08
332
N/A
Book picture is for illustrative purposes only, actual binding, cover or edition may vary.
This is a used book - there is no escaping the fact it has been read by someone else and it will show signs of wear and previous use. Overall we expect it to be in very good condition, but if you are not entirely satisfied please get in touch with us
Trustpilot