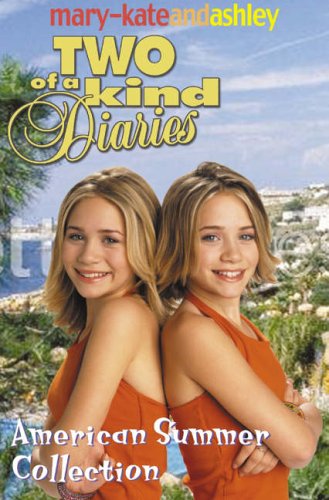 Three great Two of a Kind stories in one! The perfect Mary-Kate and Ashley summer read, featuring Two of a Kind books, 34, 35 and 36.

American Summer Collection: Bind-Up of Books 34-36 (Two Of A Kind) by Mary-Kate Olsen

Three great Two of a Kind stories in one! The perfect Mary-Kate and Ashley summer read, featuring Two of a Kind books, 34, 35 and 36.

Prom Princess
Ashley really wants to be the Prom Princess and things are going well - she has the most votes out of anyone! But then the piece of paper that proves it goes mysteriously missing... Mary-Kate and Ashley accuse nasty Dana Woletsky of stealing it, but it turns out they're wrong. There's only one way to make it up to Dana: they have to help her win the competition. It sure won't be easy getting their worst enemy voted Prom Princess!

Camp Rock `n' Roll
Mary-Kate and Ashley are off to a summer camp with a difference. It's called Camp Rock `n' Roll, and it rocks! Mary-Kate is determined to be the singing star in her group but one of the other girls, Lark, turns out to be the daughter of a famous rock-star, and she's inherited his great voice. Sounds like she'd be way better than Mary-Kate but she's too shy to perform!

Meanwhile, Ashley can't even get the other members of her band to agree on a name, never mind anything else. This music holiday camp is turning out to be hard work!

Twist and Shout
Mary-Kate has been offered the chance of a lifetime: to be in a music video with super-famous rock legend Rodney Buckingham! But she knows that Rod's daughter, Lark, has a much better voice than her, and Lark should be in the video. Mary-Kate decides to back out but every time she tries, the video producers just won't take no for an answer!

GOR001129047
American Summer Collection: Bind-Up of Books 34-36 (Two Of A Kind) by Mary-Kate Olsen
Mary-Kate Olsen
Two Of A Kind
Used - Very Good
Hardback
HarperCollins Publishers
2006-06-05
304
0007227604
9780007227600
N/A
Book picture is for illustrative purposes only, actual binding, cover or edition may vary.
This is a used book - there is no escaping the fact it has been read by someone else and it will show signs of wear and previous use. Overall we expect it to be in very good condition, but if you are not entirely satisfied please get in touch with us.