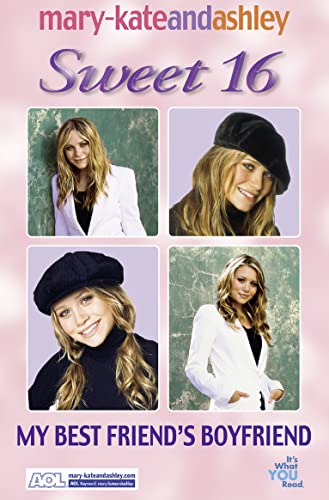 `Grease is the word' in this Sweet Sixteen story! Mary-Kate and Ashley are working on a school production of Grease, but it's tricky: the sets get ruined, the costumes need to be redone and one of the leading actors is having trouble with the script!

`Grease is the word' in this Sweet Sixteen story! Mary-Kate and Ashley are working on a school production of Grease, but it's tricky: the sets get ruined, the costumes need to be redone and one of the leading actors is having trouble with the script!

Mary-Kate is VP of the drama club, and is determined that their production of Grease is going to be the best show ever!

Her boyfriend, Jake, has joined the club so she'll see more of him and everything is looking good but then disaster strikes. The set is flooded out, so it has to be re-done, the costumes are a total disaster and have to be re-made, and how can she help Sam, who has dyslexia and has trouble reading, learn his lines in time for the big night?

Ashley, meanwhile, has a huge shock when she runs (literally!) into her ex-boyfriend Ben, who's a new student at her school. She's really pleased to see him and they agree to be `just friends'.

So why does she feel so jealous when she sees him kissing her friend, Lauren? Would she really try to flirt with her best friend's boyfriend...?

`Two teenage icons who define style for millions of American girls... Mary-Kate and Ashley are a marketing phenomenon.'
Daily Express

`Mary-Kate and Ashley must be the coolest twins around.'
tv choice

`The most recognisable young icons among children aged six to 11.'
Metro

`The most powerful teenagers on earth.'
The Independent

Mary-Kate and Ashley Olsen have been huge international stars since the age of nine months when they starred as Michelle in the US sitcom `Full House'. They have a range of videos, video games, CDs, dolls, books, a fashion line and a magazine already under their belts, and achieved fantastic sales during their first year of publication in the UK.

GOR003887053
My Best Friend's Boyfriend (Sweet Sixteen, Book 6) by Mary-Kate Olsen
Mary-Kate Olsen
Sweet Sixteen
Used - Very Good
Paperback
HarperCollins Publishers
2005-06-06
144
0007180985
9780007180981
N/A
Book picture is for illustrative purposes only, actual binding, cover or edition may vary.
This is a used book - there is no escaping the fact it has been read by someone else and it will show signs of wear and previous use. Overall we expect it to be in very good condition, but if you are not entirely satisfied please get in touch with us.