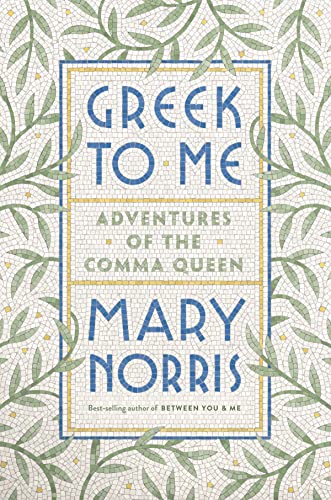 Greek to Me
by Mary Norris

In Stock
£11.99
The beloved Comma Queen returns with a buoyant and charming book about language, love and the wine-dark sea.
Very Good
Only 1 left

Greek to Me Summary

Greek to Me: Adventures of the Comma Queen by Mary Norris

In her The New York Times best-selling Between You & Me (ISBN 978 0 393 352146), Mary Norris delighted readers with her irreverent tales of pencils, punctuation and punctiliousness over three decades in The New Yorker's celebrated copy department. In Greek to Me, she delivers another wise and witty paean to the art of expressing oneself clearly and convincingly, this time filtered through her greatest passion: all things Greek.

From convincing her The New Yorker bosses to pay for Ancient Greek studies to travelling the sacred way in search of Persephone, Greek to Me is an unforgettable account of both her lifelong love affair with words and her solo adventures in the land of olive trees and ouzo. Along the way, Norris explains how the alphabet originated in Greece, makes the case for Athena as a feminist icon and reveals the surprising ways Greek helped form English. Filled with Norris's memorable encounters with Greek words, Greek gods, Greek wine-and more than a few Greek waiters-Greek to Me is the Comma Queen's fresh take on Greece and the exotic yet strangely familiar language that so deeply influences our own.

Greek to Me Reviews

"What a fantastic book! Not only is Greek to Me educational, entertaining, and gorgeously written, it shows us how intellectual curiosity coupled with a dash of bravery can pave the way for a more meaningful life. Mary Norris does for Greek and Greece what Cheryl Strayed did for hiking. Readers will long to follow in her footsteps." -- Ann Patchett
"In Greek to Me, Mary Norris' love for all things Greek is palpable and infectious. She is a charming, insightful guide through both ancient and modern glories, and I expect her lush descriptions of the Greek countryside to provoke a tourism stampede." -- Madeline Miller
"Poignant, antic, hilarious, Mary Norris is the definition of wearing your learning lightly, and after a lifetime of Greek immersion, pouring beer libations, and skinny-dipping in the waters of Aphrodite, her lessons slip down sweetly. This book is true ambrosia." -- Caroline Fraser
"I fell in love with Mary Norris's first book, and am now even more in love with this charming, ribald, highly informed, and always funny excursion through the language, culture, and oddities of Greece and the Greek language. An adventure tale for intellectuals-and also for the rest of us." -- Steve Martin
"Greek to Me is a[n]... engaging hybrid, mixing philology, travelogue, memoir and psychoanalysis." -- The Telegraph
"Mary Norris's book about her love affair with Greece and the Greek language starts with a terrific chapter about alphabets." -- The Spectator
"A love letter to Greece and its language is full of delightful facts and brims with nerdish, bookish joy... Norris is a jaunty companion, splendidly bookish, full of excellent little facts about, say, the history of the alphabet that you feel pleased to acquire. Greek gives her, she is happy to admit, "an erotic thrill". She represents a hearty riposte to the very British notion that a love of dead languages automatically renders one a chilly, Olympian elitist." -- The Guardian
"Mary Norris has a remarkable gift for conveying and transmitting passion... In her second book, Greek to Me, she demonstrates this gift with still greater aplomb..." -- Times Literary Supplement

Mary Norris is the author of Greek to Me and the New York Times bestseller Between You & Me, an account of her years in The New Yorker copy department. Originally from Cleveland, she lives in New York.

GOR009946352
Greek to Me: Adventures of the Comma Queen by Mary Norris
Mary Norris
Used - Very Good
Hardback
WW Norton & Co
2019-04-23
240
1324001275
9781324001270
N/A
Book picture is for illustrative purposes only, actual binding, cover or edition may vary.
This is a used book - there is no escaping the fact it has been read by someone else and it will show signs of wear and previous use. Overall we expect it to be in very good condition, but if you are not entirely satisfied please get in touch with us.