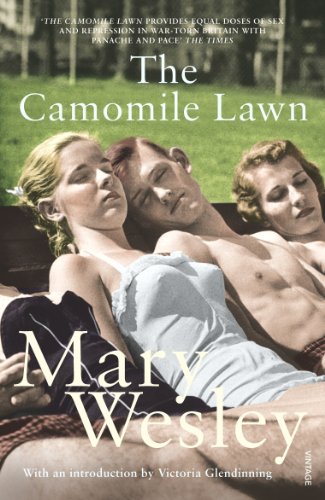 The Camomile Lawn
by Mary Wesley

In Stock
£7.99
Set in August, 1939, this story moves from Cornwall to London and back again, over the years, telling the stories of five cousins who have gathered at their aunt's house for their annual ritual of a holiday. It presents a picture of wartime London: the rationing, the fallen houses, the parties, the new-found comforts of sex, and more.
Very Good
Only 1 left

The Camomile Lawn by Mary Wesley

Behind the large house, the fragrant camomile lawn stretches down to the Cornish cliffs. Here, in the dizzying heat of August 1939, five cousins have gathered at their aunt's house for their annual ritual of a holiday. For most of them it is the last summer of their youth, with the heady exhilarations and freedoms of lost innocence, as well as the fears of the coming war.

The Camomile Lawn moves from Cornwall to London and back again, over the years, telling the stories of the cousins, their family and their friends, united by shared losses and lovers, by family ties and the absurd conditions imposed by war as their paths cross and recross over the years. Mary Wesley presents an extraordinarily vivid and lively picture of wartime London: the rationing, imaginatively circumvented; the fallen houses; the parties, the new-found comforts of sex, the desperate humour of survival - all of it evoked with warmth, clarity and stunning wit. And through it all, the cousins and their friends try to hold on to the part of themselves that laughed and played dangerous games on that camomile lawn.

Provides equal does of sex and repression in war-torn Britain with panache and pace * The Times *
A very good book indeed...rich in detail, careful and subtle in observation, mature in judgement -- Susan Hill
Extraordinarily accomplished and fast-moving * Financial Times *
It's hard to overpraise Mary Wesley's novel...so tingling and spry with life that put a mirror to the book and I'll almost swear it will mist over with the breath of the five young cousins * The Times *

Mary Wesley was born near Windsor in 1912. Her education took her to the London School of Economics and during the War she worked in the War Office. Although she initially fulfilled her parent's expectations in marrying an aristocrat she then scandalised them when she divorced him in 1945 and moved in with the great love of her life, Eric Siepmann. The couple married in 1952, once his wife had finally been persuaded to divorce him.

She used to comment that her 'chief claim to fame is arrested development, getting my first novel [Jumping the Queue] published at the age of seventy'. She went on to write a further nine novels, three of which were adapted for television, including the best-selling The Camomile Lawn. Mary Wesley was awarded the CBE in the 1995 New Year's honour list and died in 2002.

GOR001182422
The Camomile Lawn by Mary Wesley
Mary Wesley
Used - Very Good
Paperback
Vintage Publishing
2006-06-01
352
0099499142
9780099499145
N/A
Book picture is for illustrative purposes only, actual binding, cover or edition may vary.
This is a used book - there is no escaping the fact it has been read by someone else and it will show signs of wear and previous use. Overall we expect it to be in very good condition, but if you are not entirely satisfied please get in touch with us.