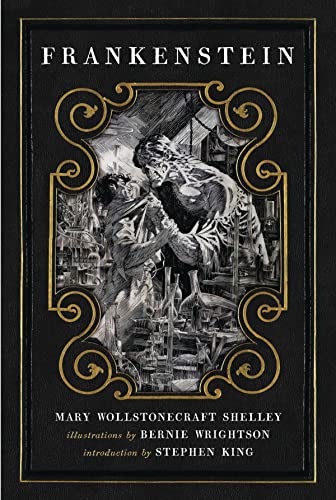 Frankenstein's Monster lives on in this landmark illustrated edition of Mary Shelley's classic novel, featuring an introduction by Stephen King.

Few works by comic book artists have earned the universal acclaim and reverence that Bernie Wrightson's illustrated version of Mary Wollstonecraft Shelley's Frankenstein was met with upon its original release in 1983. A generation later, this magnificent pairing of art and literature is still considered to be one of the greatest achievements made by any artist in the field. This book includes the complete text of the original groundbreaking novel, and approximately fifty original full-page illustrations by Bernie Wrightson-created over a period of seven years-that continue to stun the world with their monumental beauty and uniqueness.
Bernie Wrightson (1948-2017) was a comics illustrator and horror artist best known for cocreating Swamp Thing and his adaptation of the novel Frankenstein, both featuring his trademark intricate inking. He worked on Spider-Man, Batman, and The Punisher, among many others, as well as works including Frankenstein Alive, Alive; Dead, She Said; The Ghoul; and Doc Macabre, all cocreated with esteemed horror author Steve Niles. His bestselling collaborations with Stephen King on The Stand, The Dark Tower V: Wolves of the Calla, Creepshow, and Cycle of the Werewolf are considered fan favorites. As a conceptual artist, Bernie worked on many movies, particularly in the horror genre, including Ghostbusters, The Faculty, Galaxy Quest, Spider-Man, George Romero's Land of the Dead, and Frank Darabont's Stephen King film The Mist.

Stephen King is the author of more than sixty books, all of them worldwide bestsellers. His recent work includes If It Bleeds, The Institute, Elevation, The Outsider, Sleeping Beauties (cowritten with his son Owen King), and the Bill Hodges trilogy: End of Watch, Finders Keepers, and Mr. Mercedes (an Edgar Award winner for Best Novel and an AT&T Audience Network original television series). His novel 11/22/63 was named a top ten book of 2011 by The New York Times Book Review and won the Los Angeles Times Book Prize for Mystery/Thriller. His epic works The Dark Tower, It, Pet Sematary, and Doctor Sleep are the basis for major motion pictures, with It now the highest-grossing horror film of all time. He is the recipient of the 2020 Audio Publishers Association Lifetime Achievement Award, the 2018 PEN America Literary Service Award, the 2014 National Medal of Arts, and the 2003 National Book Foundation Medal for Distinguished Contribution to American Letters. He lives in Bangor, Maine, with his wife, novelist Tabitha King.
GOR011307249
Frankenstein by Mary Wollstonecraft Shelley
Mary Wollstonecraft Shelley
Used - Like New
Hardback
Simon & Schuster
20200917
288
198214615X
9781982146153
null null null null null null null null null null
Book picture is for illustrative purposes only, actual binding, cover or edition may vary.
The book has been read, but looks new. The book cover has no visible wear, and the dust jacket is included if applicable. No missing or damaged pages, no tears, possible very minimal creasing, no underlining or highlighting of text, and no writing in the margins
Trustpilot