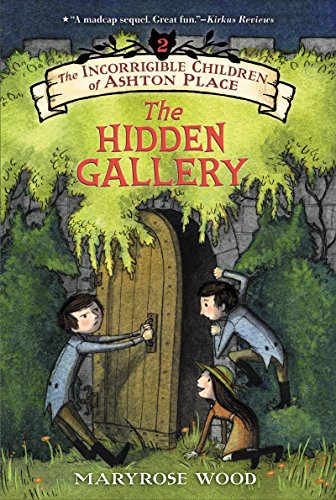 The Incorrigible Children of Ashton Place
by Maryrose Wood

In Stock
£6.49
Fifteen-year-old Miss Penelope Lumley, a governess trained at the Swanburne Academy for Poor Bright Females, takes the three Incorrigible Children of Ashton Place to London, England, and learns they are under a curse.
Very Good
Only 2 left

The second book in the Incorrigible Children of Ashton Place--the acclaimed and hilarious Victorian mystery series by Maryrose Wood, perfect for fans of Lemony Snicket and Trenton Lee Stewart--has a brand-new look.

Thanks to their plucky governess, Miss Penelope Lumley, Alexander, Beowulf, and Cassiopeia are much more like children than wolf cubs now. They are accustomed to wearing clothes. They hardly ever howl at the moon. And for the most part, they resist the urge to chase squirrels up trees.

Yet the Incorrigibles are not entirely civilized, and still managed to ruin Lady Constance's Christmas ball, nearly destroying the grand house. So while Ashton Place is being restored, Penelope, the Ashtons, and the children take up residence in London. As they explore the city, Penelope and the Incorrigibles discover more about themselves as clues about the children's--and Penelope's own--mysterious past crop up in the most unexpected ways....

"Another series of uproarious escapades. fans of the first book will be happy to go along for the madcap ride."--School Library Journal
"[A] madcap sequel. Great fun, and it wouldn't be optoomuchstic to expect more to come."--Kirkus Reviews

Maryrose Wood is the author of the first five books (so far!) in this series about the Incorrigible children and their governess. These books may be considered works of fiction, which is to say, the true bits and the untrue bits are so thoroughly mixed together that no one should be able to tell the difference. This process of fabrication is fully permitted under the terms of the author's Poetic License, which is one of her most prized possessions. Maryrose's other qualifications for writing these tales include a scandalous stint as a professional thespian, many years as a private governess to two curious and occasionally rambunctious pupils, and whatever literary insights she may have gleaned from living in close proximity to a clever but disobedient dog. Jon Klassen grew up in Niagara Falls, Canada, and now lives in Los Angeles, California. He is the Caldecott Award-winning author and illustrator of I Want My Hat Back and This Is Not My Hat, as well as the illustrator of Sam and Dave Dig a Hole and Extra Yarn by Mac Barnett; The Dark by Lemony Snicket; House Held Up by Trees by Ted Kooser; Cats' Night Out by Caroline Stutson; and the first three books in the Incorrigible Children of Ashton Place series.

GOR007240808
The Incorrigible Children of Ashton Place: Book II: The Hidden Gallery by Maryrose Wood
Maryrose Wood
Incorrigible Children of Ashton Place
Used - Very Good
Paperback
HarperCollins Publishers Inc
2015-04-21
336
0062366947
9780062366948
N/A
Book picture is for illustrative purposes only, actual binding, cover or edition may vary.
This is a used book - there is no escaping the fact it has been read by someone else and it will show signs of wear and previous use. Overall we expect it to be in very good condition, but if you are not entirely satisfied please get in touch with us.