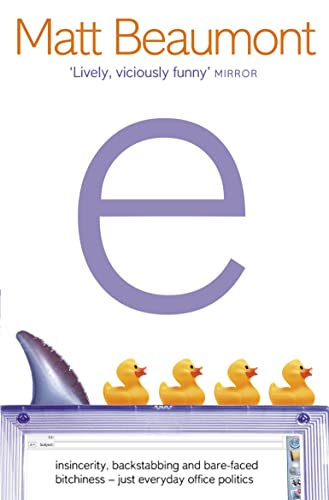 An unforgettable first novel, an author to shout about, a campaign to ensure that everyone knows this is the funniest, sharpest read of the year.

e: A Novel by Matt Beaumont

An unforgettable first novel, an author to shout about, a campaign to ensure that everyone knows this is the funniest, sharpest read of the year.

Consisting entirely of staff emails, e spends a fortnight in the company of Miller Shanks, an advertising agency that scales dizzying peaks of incompetence. Among the cast are a CEO with an MBA from the Joseph Stalin School of Management, a Creative Director who is a genius, if only in his own head, designers and copywriters driven by breasts, beer or Bach Flower Remedies, and secretaries who drip honey and spit blood.

The novel is a tapestry of insincerity, backstabbing and bare-arsed bitchiness: that is to say, everyday office politics. Oh yes, and there is some work to be done too - the quest for advertising's Eldorado, the Coca-Cola account.

e is sleazy, scurrilous and scabrously funny. It also contains a first-class joke about the Pope and sound advice on the maintenance of industrial carpet tiles.

Praise for e
`A brilliantly plotted comic novel about life in an advertising agency, narrated entirely through office emails. It gives me more sense that literature is alive and kicking than anything else I've read in these millennial 12 months.' Humphrey Carpenter, Sunday Times Review of the Year

`Lively, viciously funny and about as switched on as a novel can be' Mirror

Matt Beaumont is a copywriter and has been fired by some of London's leading ad agencies. He lives in North London with his wife and two children.

GOR000426015
e: A Novel by Matt Beaumont
Matt Beaumont
Used - Very Good
Paperback
HarperCollins Publishers
2000-09-04
352
000710068X
9780007100682
N/A
Book picture is for illustrative purposes only, actual binding, cover or edition may vary.
This is a used book - there is no escaping the fact it has been read by someone else and it will show signs of wear and previous use. Overall we expect it to be in very good condition, but if you are not entirely satisfied please get in touch with us.