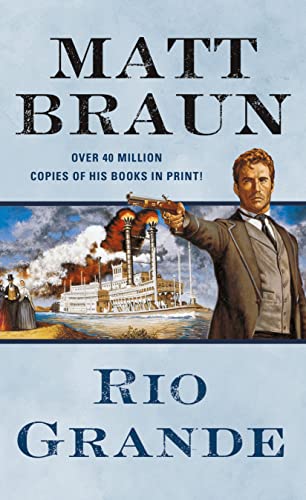 In Stock
£3.59
Tom Stuart takes risks - in war, love and card games - from St Louis to Mexico. And the hard-drinking, fast-talking steamboat captain has a dream of building a shipping empire that will span the windswept Gulf of Mexico to rich, exotic New Orleans.
Very Good Good
Only 1 left

Tom Stuart takes risks--in war, in love, and in card games, from St. Louis to Mexico. And the hard-drinking, fast-talking steamboat captain--who knows every shoal and eddy of the Rio Grande from the Big Bend to Brownsville--has a dream of building a shipping empire that will span the windswept Gulf of Mexico to rich, exotic New Orleans. But this is a kind of gamble he's never faced before: with a woman to win, a woman to lose, and a dangerous man standing in the way. Now, Stuart is plunged into a fight that will engulf his very soul. And to the winner will go the mighty Rio Grande...

"Matt Braun is one of the best!" --Don Coldsmith, author of The Spanish Bit series

"He tells it straight-- and he tells it well." --Jory Sherman, author of Grass Kingdom

MATT BRAUN was a fourth generation Westerner, steeped in the tradition and lore of the frontier era. His books reflect a heritage rich with the truths of that bygone time. Raised among the Cherokee and Osage tribes, Braun learned their traditions and culture, and their philosophy became the foundation of his own beliefs. Like his ancestors, he spent most of his life wandering the mountains and plains of the West. His heritage and his contribution to Western literature resulted in his appointment by the Governor of Oklahoma as a Territorial Marshal.

Braun was the author of forty-seven novels and four nonfiction works, including Black Fox, which was made into a CBS miniseries. Western Writers of America awarded Braun the prestigious Spur Award for his novels Dakota and The Kincaids and the 2004 Wister Award for Lifetime Achievement in Western Literature. Braun passed away in 2016.

GOR010210341
Rio Grande by Matt Braun
Matt Braun
Used - Very Good
Paperback
St Martin's Press
1998-12-10
358
0312966636
9780312966638
N/A
Book picture is for illustrative purposes only, actual binding, cover or edition may vary.
This is a used book - there is no escaping the fact it has been read by someone else and it will show signs of wear and previous use. Overall we expect it to be in very good condition, but if you are not entirely satisfied please get in touch with us.