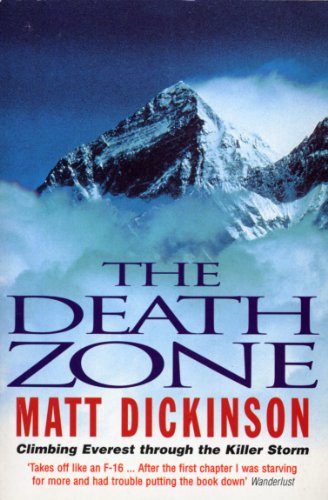 In Stock
£3.99
The desperate attempts of teams on the southern side of the mountain, fatal errors that led to the deaths of three Indian climbers on the North Ridge and the moving story of Rob Hall, the New Zealand guide who stayed with his stricken client, and paid with his life.
Very Good
9 in stock

It seemed like any other season on Mount Everest. Ten expeditions from around the world were preparing for their summit push, gathered together to try for mountaineering's ultimate prize. Twenty-four hours later, eight of those climbers were dead, victims of the most devastating storm ever to hit Everest. On the North face of the mountain, a British expedition found itself in the thick of the drama. Against all odds, film-maker Matt Dickinson and professional climber Alan Hinkes managed to battle through hurricane-force winds to reach the summit. In Death Zone, Matt Dickinson describes the extraordinary event that put the disaster on the front cover of Time and Newsweek. The desperate attempts of teams on the southern side of the mountain, fatal errors that led to the deaths of three Indian climbers on the North Ridge and the moving story of Rob Hall, the New Zealand guide who stayed with his stricken client, and paid with his life. Based on interviews with the surviving climbers and the first-hand experience of having lived through the killer storm, this gripping non-fiction book tackles issues at the very heart of mountaineering. Death Zone is an extraordinary story of human triumph, folly and disaster.

"Dickinson's book reads like a thriller, pacy and exciting, [...] a real page turner" * The Guardian *
"A gripping account of filming - and surviving - in the death zone" * Mail on Sunday *
"Takes off like an F-16...After the first chapter I was starving for more and had trouble putting the book down" * Wanderlust *

Matt Dickinson is a British film-maker and writer who is best known for his documentary work for Discovery Channel, National Geographic and the BBC. In 1996, Dickinson became the first British film-maker to film from the top of Mount Everest and return alive. His documentary film about this ill-fated expedition, Summit Fever, has been critically acclaimed worldwide. He has written a number of mountaineering books and made many adventure and nature documentaries.

GOR001028747
Death Zone by Matt Dickinson
Matt Dickinson
Used - Very Good
Paperback
Cornerstone
1998-07-02
224
0099255723
9780099255727
N/A
Book picture is for illustrative purposes only, actual binding, cover or edition may vary.
This is a used book - there is no escaping the fact it has been read by someone else and it will show signs of wear and previous use. Overall we expect it to be in very good condition, but if you are not entirely satisfied please get in touch with us.