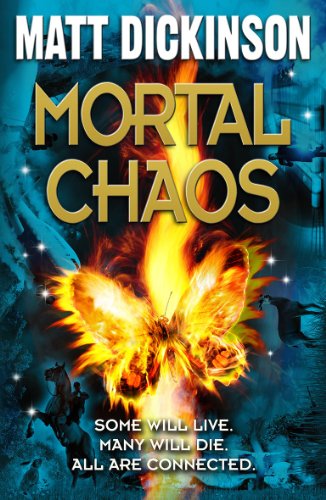 In Stock
£1.99
When a butterfly startles a young rabbit, and the rabbit makes a horse rear, it starts a chain of events, over the course of one day, that will change people's lives . . . and end people's lives. From the climber on Everest to the boy in Malawi . . . the commercial pilot to the American psycho . . . the chaos knows no bounds.
Very Good Good
7 in stock

'The Butterfly Effect ': the scientific theory that a single occurrence, no matter how small, can change the course of the universe forever. When a butterfly startles a young rabbit, and the rabbit makes a horse rear, it starts a chain of events, over the course of one day, that will change people's lives . . . and end people's lives. From a climber on Everest to a boy in Malawi . . . from a commercial pilot to an American psycho . . . the chaos knows no bounds. This heart-stopping adventure by writer, film maker and climber Matt Dickinson will leave readers breathless. It's the book Jack Bauer would have read as a teenager!

'. . . action-packed crackers kids will fly through.' * The Sun *
'Thrilling and thoughtful stuff for a 21st-century reader' * Telegraph *
'A pacy and thrilling read building to a dramatic finale. An imaginative page turner' * Booktrust *
'Slick as an oil-spill, and equally combustive, this yarn for mid-teens takes chaos theory as its basis . . . Gripping.' * The Telegraph *
'A fast-paced thriller with a generous drizzle of epicness. Utterly devourable.' * LoveReading4kids.co.uk, teen reader review *

Matt Dickinson is a writer and film maker with an enduring (and sometimes dangerous) passion for wild places and even wilder people. He was trained at the BBC and has subsequently filmed many award winning documentaries for National Geographic television, Discovery Channel and Channel 4. As a director/cameraman he has worked with some of the world's top climbers and adventurers, joining them on their expeditions to the Himalayas and beyond. Along the way he has survived some life threatening dramas; an avalanche in Antarctica, a killer storm on Everest and a night time 'grizzly bear' attack in the Yukon which wasn't quite what it seemed (actually they were beavers!). Matt's proudest moment was filming on the summit of Mount Everest having successfully scaled the treacherous north face of the world's highest peak. www.mattdickinson.com

GOR003556571
Mortal Chaos by Matt Dickinson
Matt Dickinson
Used - Very Good
Paperback
Oxford University Press
2012-02-02
304
019275713X
9780192757135
N/A
Book picture is for illustrative purposes only, actual binding, cover or edition may vary.
This is a used book - there is no escaping the fact it has been read by someone else and it will show signs of wear and previous use. Overall we expect it to be in very good condition, but if you are not entirely satisfied please get in touch with us.