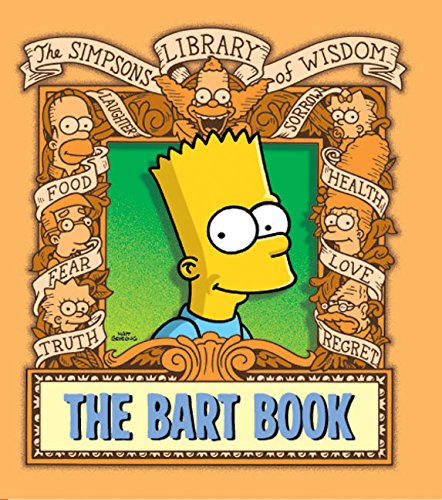 In Stock
£4.99
No other television show in history has commented so freely and so humourously on modern times, and there seems to be no end in sight for the sharp satire and pointed parody that 'The Simpsons' serves up every night of the week.
Very Good
Only 2 left

The Bart Book is now being released in hardback, as part of the ongoing series: The Simpsons Library of Wisdom.

Bart Simpson, the much-maligned, misunderstood, under-appreciated 'underachiever', comes clean and (God help us!) it's worse than we thought. Now the truth can be told at last as Bart offers up his school survival guide, secret codes, pullable pranks, dream tattoos, favourite El Barto 'tags', and the Christmas list to end all lists (and future visits from Santa). It's the worst, we mean . the best book ever!

In The Simpsons Library of Wisdom, Matt Groening, the creator of 'The Simpsons', offers an ongoing series of portable and quotable books that will eliminate the need for all religions and philosophies, exalt man's role in the universe and make the world a better place ... sort of. No other television show in history has commented so freely and so humorously on modern times, and there seems to be no end in sight for the sharp satire and pointed parody that 'The Simpsons' serves up every night of the week all around the world.

Matt Groening, the creator and executive producer of the Emmy(R) Award-winning series The Simpsons, as well as creator of the cartoon strip "Life in Hell" and the animated FOX television series Futurama, is the man responsible for bringing animation back to primetime and creating an immortal nuclear family. In addition, Groening formed Bongo Comics Group in 1993 and currently serves as publisher of The Simpsons Library of Wisdom, Simpsons Episode Guides, Simpsons Comics, Bart Simpson Comics, Radioactive Man Comics, Simpsons Comics Treasure Trove, the annual Bart Simpson's Treehouse of Horror, Futurama Comics and more than 36 comic compilations, as well as many instant classics including Bart Simpsons Guide to Life, The Simpsons Handbook and The Simpsons Uncensored Family Album.

GOR002789763
Bart Book by Matt Groening
Matt Groening
Simpsons Library Of Wisdom Series
Used - Very Good
Paperback
Unknown
0
0061116602
9780061116605
N/A
Book picture is for illustrative purposes only, actual binding, cover or edition may vary.
This is a used book - there is no escaping the fact it has been read by someone else and it will show signs of wear and previous use. Overall we expect it to be in very good condition, but if you are not entirely satisfied please get in touch with us.