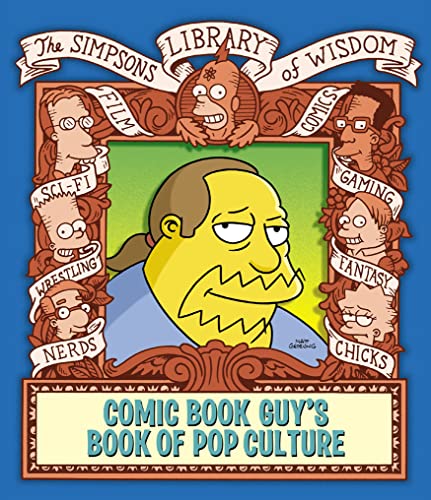 The latest release from the best-selling Simpsons Library of Wisdom series.

The latest release from the best-selling Simpsons Library of Wisdom series.

Resident of Springfield and owner of the Android's Dungeon & Baseball Card Shop, the infamous Comic Book Guy spends his days at the comfort of his stool, patiently awaiting his next paying customer. The Comic Book guy embodies all the traits of your typical comic book shop owner, being tubby, and wearing his brown hair in a pony tail. He is also known for being extremely sarcastic. Being a sci-fi, comic and movie buff, the Comic Book Guy holds several prized collectibles: a rare copy of Mary Worth, in which Mary advises a friend to commit suicide, as well as his rare photo of Sean Connery, signed by Roger Moore.

In some scenarios, the Comic Book Guy can be found sporting his alter-ego, "The Collector", a menacing superhero with the intention of finding the most sought-after collectible! (The Collector makes his first appearance in the Treehouse of Horror X Halloween special).

Matt Groening, the creator and executive producer of the Emmy Award-winning series "The Simpsons" and "Futurama". He lives in Los Angeles, California.

GOR001090672
The Comic Book Guy's Book of Pop Culture (The Simpsons Library of Wisdom) by Matt Groening
Matt Groening
The Simpsons Library of Wisdom
Used - Very Good
Hardback
HarperCollins Publishers
2005-10-17
96
0007208154
9780007208159
N/A
Book picture is for illustrative purposes only, actual binding, cover or edition may vary.
This is a used book - there is no escaping the fact it has been read by someone else and it will show signs of wear and previous use. Overall we expect it to be in very good condition, but if you are not entirely satisfied please get in touch with us.