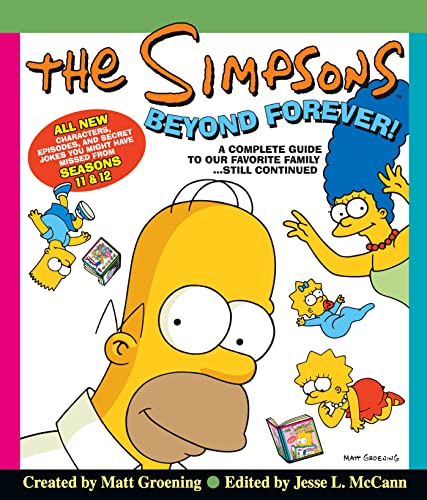 The Simpsons Beyond Forever!
by Matt Groening

A new hardcover collector's edition of the third "Simpsons Complete Guide" series, the only official episode guide to Seasons 11 and 12.

The Simpsons Beyond Forever! Summary

The Simpsons Beyond Forever!: A Complete Guide to Our Favorite Family ... Still Continued by Matt Groening

A new hardcover collector's edition of the third "Simpsons Complete Guide" series, the only official episode guide to Seasons 11 and 12.

This is the follow-up to the best-selling episode guides Simpsons Forever and The Simpsons: A Complete Guide to our Favourite Family.

With the Simpsons drawing massive audiences, on Channel Four and Sky, and with the Simpsons Movie released on 27 July 2007, America's favourite yellow family continue to prove they have captured the hearts of adults and children alike. This is packed full of information on the superstars of the show, and everything you may have missed while glued to the 11th and 12th seasons' episodes.

Complete with plot synopses, quotes, new characters, and addenda to all the lists from the first two volumes, this new guide offers an exhaustively funny look at The Simpsons for the most detail-oriented fan, the casual viewer, and everyone in between.

The Simpsons Beyond Forever! Reviews

`As immaculately presented as the show itself, it's also packed with the sort of specialist information true fans will fight over. Geek chic.' The Mirror

`The wittiest and most literate show on television.' The Times

`Fact: The Simpsons is the funniest sitcom of all time. There are more gags, more characters, funnier plots, funnier sub-plots.' Loaded

Matt Groening is the creator and genius behind The Simpsons, Futurama and Life in Hell.

GOR001102472
The Simpsons Beyond Forever!: A Complete Guide to Our Favorite Family ... Still Continued by Matt Groening
Matt Groening
Used - Very Good
Hardback
HarperCollins Publishers
2007-06-04
128
0007255462
9780007255467
N/A
Book picture is for illustrative purposes only, actual binding, cover or edition may vary.
This is a used book - there is no escaping the fact it has been read by someone else and it will show signs of wear and previous use. Overall we expect it to be in very good condition, but if you are not entirely satisfied please get in touch with us.