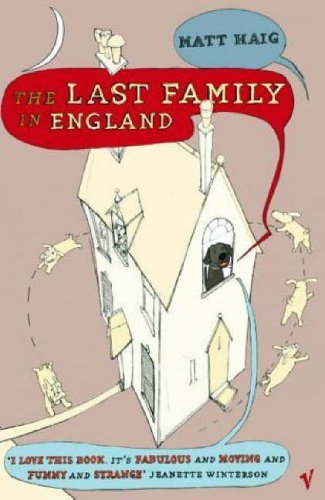 The Last Family In England
by Matt Haig

The Last Family In England Summary

The Last Family In England by Matt Haig

By the author of Reasons to Stay Alive Meet the Hunter family: Adam, Kate, and their children Hal and Charlotte. And Prince, their black Labrador. Prince is an earnest young dog, striving hard to live up to the tenets of the Labrador Pact (Remain Loyal to Your Human Masters, Serve and Protect Your Family at Any Cost). Other dogs, led by the Springer Spaniels, have revolted. Their slogans are 'Dogs for Dogs, not for Humans' and 'Pleasure not Duty'. Mentored by an elderly Labrador called Henry, Prince takes his responsibilities seriously, and as things in the Hunter family begin to go badly awry - marital breakdown, rowdy teenage parties, attempted suicide - his responsibilities threaten to overwhelm him. And down in the park it's even worse: Henry has disappeared; Falstaff the Springer Spaniel wants to lead Prince astray; Joyce the Irish wolfhound has been murdered. In the end Prince is forced to break the Labrador Pact and take desperate action to save his Family.

The Last Family In England Reviews

"Normally, if a book makes me sad I chuck it immediately. But this book is so brilliant, I broke my own rule" -- Julie Burchill
"A comic tour de force... A desperately sad view from underneath as a family falls apart" * The Times *
"A winner from page one... A subtle, dog's-eye view of the frailty of human relationships, it is perceptive, enchanting and destined to be this summer's must read" * Mail on Sunday *
"An enchanting, albeit at times disturbing, journey into the heart of family... A remarkable book, and a brilliantly entertaining read" * Big Issue *
"It sounds kooky, but Haig pulls it off stylishly and unsentimentally" * Observer *

Matt Haig is a British author for children and adults. His memoir Reasons to Stay Alive was a number one bestseller, staying in the British top ten for 46 weeks. His children's novels have won the Smarties Gold Medal, the Blue Peter Book of the Year, been shortlisted for the Waterstones Children's Book Prize and nominated for the Carnegie Medal three times. His books have received praise from Neil Gaiman, Stephen Fry, Jeanette Winterson, Joanne Harris, Patrick Ness, Ian Rankin and SJ Watson, among others. The Guardian summed up his writing as 'funny, clever and quite, quite lovely' by The Times and the New York Times called him 'a writer of great talent'.

GOR000388045
The Last Family In England by Matt Haig
Matt Haig
Used - Very Good
Paperback
Vintage Publishing
2005-05-05
352
009946845X
9780099468455
N/A
Book picture is for illustrative purposes only, actual binding, cover or edition may vary.
This is a used book - there is no escaping the fact it has been read by someone else and it will show signs of wear and previous use. Overall we expect it to be in very good condition, but if you are not entirely satisfied please get in touch with us.