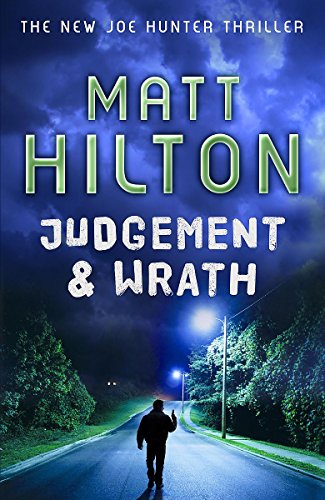 Judgement and Wrath
by Matt Hilton

In Stock
£3.99
The second thriller in the Joe Hunter series - Hodder's major fiction launch of 2009
Very Good
Only 1 left

Judgement and Wrath by Matt Hilton

'Some call me a vigilante. I think I've just got problems to fix.'

Joe Hunter doesn't like bullies. So his latest job - saving a young woman from her bully boyfriend - is a no-brainer. Hunter's only worry is that the man who hired him is looking for more than protection for his daughter. One thing Hunter has never been, and never will be, is a killer-for-hire.

As it turns out, the vengeful father isn't the only one who wants the boyfriend dead. Soon Hunter is face-to-face with a contract killer who takes his work very seriously.

Dantalion has a talent for killing and keeps a list of his victims in a book chained to his waist. Each victim is numbered. And the body count is about to start rising . . .

Praise for DEAD MEN'S DUST:
'A dose of pure rocket fuel. Starts fast, gets faster, and doesn't quit right through to the slam bang finale. Dead Men's Dust is as enjoyable a thriller as you will read this year, and I do mean "Thriller!" My ears are still ringing with gunfire! I loved this book.'

* Christopher Reich, author of RULES OF DECEPTION *
Taut, thrilling, tense - I loved it! * Richard Hammond *
Hard-hitting and fast-paced, I was hooked from start to finish * Simon Kernick *

Matt Hilton worked for twenty-two years in private security and the police force in Cumbria. He is a 4th Dan blackbelt and coach in Ju-Jitsu. He lives in Cumbria with his wife Denise. He keeps a website at www.matthiltonbooks.com and can be found on Facebook and on twitter.com/matthilton

GOR001191327
Judgement and Wrath by Matt Hilton
Matt Hilton
Joe Hunter
Used - Very Good
Hardback
Hodder & Stoughton General Division
2009-10-15
320
0340978244
9780340978245
N/A
Book picture is for illustrative purposes only, actual binding, cover or edition may vary.
This is a used book - there is no escaping the fact it has been read by someone else and it will show signs of wear and previous use. Overall we expect it to be in very good condition, but if you are not entirely satisfied please get in touch with us.