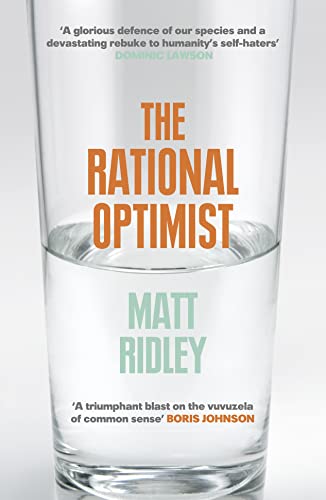 The Rational Optimist
by Matt Ridley

Shortlisted for the BBC Samuel Johnson Prize for Non-fiction 2011.

Life is on the up.

The Rational Optimist: How Prosperity Evolves by Matt Ridley

Shortlisted for the BBC Samuel Johnson Prize for Non-fiction 2011.

Life is on the up.

We are wealthier, healthier, happier, kinder, cleaner, more peaceful, more equal and longer-lived than any previous generation. Thanks to the unique human habits of exchange and specialisation, our species has found innovative solutions to every obstacle it has faced so far.

In `The Rational Optimist', acclaimed science writer Matt Ridley comprehensively refutes the doom-mongers of our time, and reaches back into the past to give a rational explanation for why we can - and will - overcome the challenges of the future, such as climate change and the population boom.

Bold and controversial, it is a brilliantly confident assertion that the 21st century will be the best for humankind yet.

`A triumphant blast on the vuvuzela of common sense' Boris Johnson

`A glorious defence of our species... a devastating rebuke to humanity's self-haters' Sunday Times

`His theory is, in a way, the glorious offspring that would result if Charles Darwin's ideas were mated with those of Adam Smith' The Economist

`As a work of bold historical positivity it is to be welcomed. At every point cheerfulness keeps breaking through' The Times

Matt Ridley received his BA and D. Phil at Oxford researching the evolution of behaviour. He has been science editor, Washington correspondent and American editor of The Economist. He is the author of bestselling titles The Red Queen (1993), The Origins of Virtue (1996), Genome (1999) and Nature via Nurture (2003). His books have sold over half a million copies, been translated into 25 languages and been shortlisted for six literary prizes. In 2004 he won the National Academies Book Award from the US National Academies of Science, Engineering and Medicine for Nature via Nurture. In 2007 Matt won the Davis Prize from the US History of Science Society for Francis Crick: Discoverer of the Genetic Code. He is married to the neuroscientist Professor Anya Hurlbert.

GOR002742152
The Rational Optimist: How Prosperity Evolves by Matt Ridley
Matt Ridley
Used - Very Good
Paperback
HarperCollins Publishers
2011-03-31
464
0007267126
9780007267125
Short-listed for BBC Samuel Johnson Prize for Non-Fiction 2011
Book picture is for illustrative purposes only, actual binding, cover or edition may vary.
This is a used book - there is no escaping the fact it has been read by someone else and it will show signs of wear and previous use. Overall we expect it to be in very good condition, but if you are not entirely satisfied please get in touch with us.