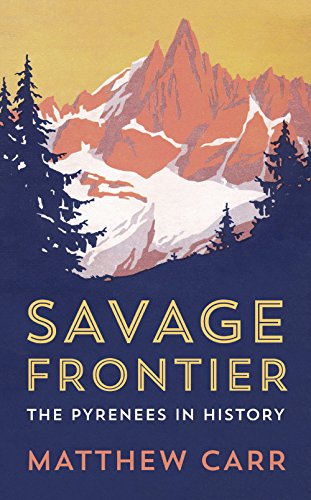 In Stock
£19.99
The haunting history of the Pyrenees-a physical and political faultline that looms large in European history.
New£19.99
Only 2 left

Savage Frontier: The Pyrenees in History by Matthew Carr

Savage Frontier traces the routes over the mountains taken by monks, soldiers, poets, pilgrims and refugees, examining the lives and events that have shaped the Pyrenees across the centuries. Its cast of characters includes Napoleon, Hannibal and Charlemagne; the eccentric British climber Lord Henry Russell; Francisco Sabate Llopart, the Catalan anarchist who waged a lone war across the Pyrenees against Franco for years after the Civil War; and the cellist Pau Casals, who spent more than twenty-three years in exile only a few miles from the Spanish border, to show his disapproval of the regime. Acclaimed author Matthew Carr uncovers the fascinating story of one of the most dramatic landscapes on Earth-both a forbidding, mountainous frontier zone of stunning beauty and a site of sharp conflict between nations and empires.

'Matthew Carr has written a rich, deeply researched and absorbing history, full of extraordinary and surprising tales and an impassioned sense of the unique beauty of one of Europe's lesser-known places.' -- Roger Crowley, author of 'Conquerors: How Portugal Forged the First Global Empire'
'Carr conjures up a magical account of the mountainous divide between Spain and France, with its witches and heretics, its isolated villages, its ancient traditions of independence, and its babel of languages. A beautifully written book that nimbly weaves together his own travels and the history of the Pyrenees.' -- David Abulafia, Professor Emeritus of Mediterranean History, University of Cambridge, and author of 'The Great Sea: A Human History of the Mediterranean'
'There are so many inviting leads to be followed up in this book that no one who loves the Pyrenees or plans to explore them should be without it.' * The Spectator *
`Packed with drama, peril and ambition, these stories offer glimpses into how the physical world has shaped life in Europe across the centuries.'
'A fascinating narrative . . . the book stands as a celebration of the Pyrenees.'
`Richly textured . . . a vivid, deeply informed travelogue.'

Matthew Carr is a freelance journalist whose work has appeared in The Observer, The Guardian, The New York Times and on BBC Radio. He is the author of The Infernal Machine: An Alternative History of Terrorism; Fortress Europe: Inside the War Against Immigration; and The Devils of Cardona.