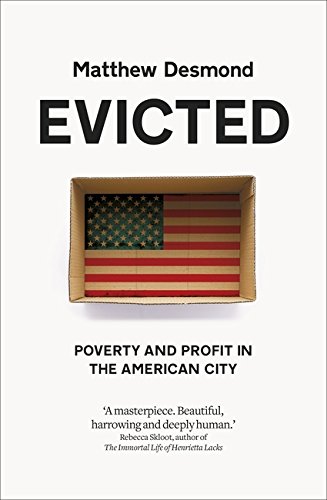 Out of Stock
£11.99
Arleen spends nearly all her money on rent but is kicked out with her kids in Milwaukee's coldest winter for years. Doreen's home is so filthy her family call it 'the rat hole'. Lamar, a wheelchair-bound ex-soldier, tries to work his way out of debt for his boys. Scott, a nurse turned addict, lives in a gutted-out trailer. This is their world.
Very Good Good
Only 0 left

Evicted: Poverty and Profit in the American City by Matthew Desmond

'Essential. A compelling and damning exploration of the abuse of one of our basic human rights: shelter.' Owen Jones Arleen spends nearly all her money on rent but is kicked out with her kids in Milwaukee's coldest winter for years. Doreen's home is so filthy her family call it 'the rat hole'. Lamar, a wheelchair-bound ex-soldier, tries to work his way out of debt for his boys. Scott, a nurse turned addict, lives in a gutted-out trailer. This is their world. And this is the twenty-first century: where fewer and fewer people can afford a simple roof over their head. From abandoned slums to shelters, eviction courts to ghettoes, Matthew Desmond spent years living with and recording the stories of those struggling to survive - yet who won't give up. A work of love, care and humanity, Evicted reminds us why, without a home, nothing else is possible. It is one of the most necessary books of our time. 'This is an extraordinary and crucial piece of work. Read it. Please, read it' - Adrian Nicole LeBlanc, author of Random Family 'Sensitive, achingly beautiful' - Robert D. Putnam, author of Our Kids

This is an extraordinary and crucial piece of work. Read it. Please, read it -- Adrian Nicole LeBlanc, author of RANDOM FAMILY
This sensitive, achingly beautiful ethnography should refocus our understanding of poverty in America on the simple challenge of keeping a roof over your head. -- Robert D. Putnam, Professor of Public Policy, Harvard, and author of BOWLING ALONE and OUR KIDS
Evicted is astonishing-a masterpiece of writing and research that fills a tremendous gap in our understanding of poverty. Taking us into some of America's poorest neighborhoods, Desmond illustrates how eviction leads to a cascade of events, often triggered by something as simple as a child throwing a snowball at a car, that can trap families in a cycle of poverty for years. Beautiful, harrowing, and deeply human, Evicted is a must read for anyone who cares about social justice in this country. I loved it. -- Rebecca Skloot, author of THE IMMORTAL LIFE OF HENRIETTA LACKS
A monumental and vivid study of urban poverty ... Evicted demands attention. It shines a klieg light on a dark corner of the American experience -- Ed Caesar * Sunday Times *
An intimate portrait of what it's like to be powerless in the world's superpower ... Evicted shows how the smallest event can rip through poor lives, sending them spinning out of control... To British eyes, the narrative reads like a dispatch from the near-future. -- Aditya Chakrabortty * Guardian *
Astonishing ... Desmond has set a new standard for reporting on poverty -- Barbara Ehrenreich * Herald *
A tale of tragedy... We, in Britain, are taking the US' path. From where do you think the UK coalition government of 2010 got the idea of sanctions? To where do you think the Conservative government of 2015 now looks for new ideas? -- Danny Dorling * Times Higher Education *
Heartbreaking... Desmond's acute observational skills, his facility with reported dialogue and his ability to wrench chaotic stories into clear prose make EVICTED a vivid, if sometimes gruelling, read... with UK house prices unaffordable, a dearth of council housing and a Government committed to austerity, EVICTED serves as a warning as to what happens when a society refuses to recognise the fundamental human right to shelter -- Keith Kahn-Harris * Independent *
A remarkable ethnography ... [Desmond] has a novelist's eye for the telling detail and a keen ear for dialogue ... This is a significant literary achievement, as well as a feat of reporting underpinned by statistical labour -- Jonathan Derbyshire * Financial Times *
For the two or three weeks I was reading the book, it formed my topic of conversation with friends, and at night, when I went to sleep, it filled my thoughts ... It makes you aware of how complicated the webs holding you up are. -- Benjamin Markovits * New Statesman *
An extraordinary ethnographic study... Desmond takes people who are usually seen as worthless, and shows us their full humanity ... By examining one city through the microscopic lens of housing, he shows us how the system that produces that pain and poverty was created and is maintained. -- Katha Pollitt * Guardian *

2015 MacArthur 'Genius' award winner Matthew Desmond is an associate professor of sociology and social science at Harvard University and co-director of the Justice and Poverty Project. He is the author of the award-winning book On The Fireline and his writing has appeared in The New York Times and Chicago Tribune.

GOR007297127
Evicted: Poverty and Profit in the American City by Matthew Desmond
Matthew Desmond
Used - Very Good
Hardback
Penguin Books Ltd
2016-03-03
432
024126085X
9780241260852
N/A
Book picture is for illustrative purposes only, actual binding, cover or edition may vary.
This is a used book - there is no escaping the fact it has been read by someone else and it will show signs of wear and previous use. Overall we expect it to be in very good condition, but if you are not entirely satisfied please get in touch with us.