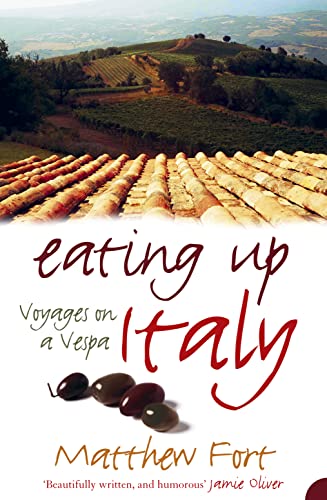 Eating Up Italy
by Matthew Fort

Italy's tumultuous history can be traced through its food. In an epic scooter trip from the Ionian Sea to the far north, distiguished food writer Matthew Fort explores the local gastronomy and culinary culture of a country where regional differences are vibrantly alive.

Eating Up Italy: Voyages on a Vespa by Matthew Fort

Italy's tumultuous history can be traced through its food. In an epic scooter trip from the Ionian Sea to the far north, distiguished food writer Matthew Fort explores the local gastronomy and culinary culture of a country where regional differences are vibrantly alive.

In no other country is food so much a part of everyday life as it is in Italy. Matthew Fort's plan is a simple one: to travel by scooter from Melito di Porto Salvo - the southernmost town in Italy and where Garibaldi landed in 1860 to begin his conquest of Naples - to Turin in the north, eating drinking, talking and noting as he goes.

Passing through Calabria - rich in spices, Arabian-influences of almonds and dried fruits, as well as Spanish chocolate (Fichi al Ciocolatto, mostacciolo) - and on to Campania - from where the historic Nepalese pizza has become infamous - Fort discovers the rich connection between historical tradition and cuisine. The Italian genius for combining abundance and thrift is evident from the economy of the mountainous and sparse landscape of Molise, where much use is made of pastas and chillies, and adjoining lush Abruzzo, with its delicious cheeses and risottos.
Fort travels on to Emilia-Romagna, where much of what we have come to love in Italian food can be found: prosciutto di Parma, mortadella, ravioli, taggliatelle and zamponi...In Piedmont, the wine-and-truffle country stretching from the shadow of the Alps through arable flatlands, the cooking of France and Northern Europe fuses with that of Italy. This enticing sum of parts - the dishes, producers, ingredients, consumers and eating occasions - make up nothing less than a contemporary portrait of the country.

'Elizabeth David meets Jack Kerouac - around the table and on the road, this is a brilliant insight into Italian gastro-culture.'
Giorgio Locatelli

`Lemon blossom and freshly baked bread waft up from every page. The most intensely greedy, fragrant and sensuously written travelogue I have ever read. A glorious, glorious feast.'
Nigel Slater

'A beautifully written, humorous account of a talented food writer controlling what seems to be a midlife crisis by travelling around Italy on a Vespa.' Jamie Oliver

Matthew Fort has nursed a passion for the whole of Italy and its foods since his first visit at the age of eleven. Whilst pursuing a career in advertising he started writing about food in the Financial Times and eventually became Food & Drink editor of the Guardian in 1989. As well as continuing to hold that post, he writes for Esquire, the Observer, Country Living, Decanter and Food Illustrated.

GOR001213338
Eating Up Italy: Voyages on a Vespa by Matthew Fort
Matthew Fort
Used - Very Good
Paperback
HarperCollins Publishers
2005-06-20
304
0007214812
9780007214815
N/A
Book picture is for illustrative purposes only, actual binding, cover or edition may vary.
This is a used book - there is no escaping the fact it has been read by someone else and it will show signs of wear and previous use. Overall we expect it to be in very good condition, but if you are not entirely satisfied please get in touch with us.