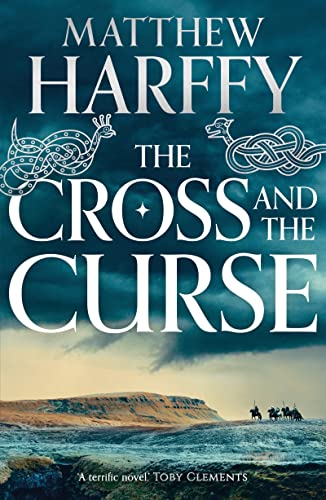 The Cross and the Curse by Matthew Harffy

AD 634 Anglo-Saxon Britain. Confusion and conflict continue as warlords battle across Britain to become the first King of the English. The second instalment in the Bernicia Chronicles, an action-packed historical thriller set in Anglo-Saxon Britain.

The Cross and the Curse by Matthew Harffy

Confusion and conflict continue as warlords battle across Britain to become the first King of the English.

After a stunning victory against the native Waelisc, Beobrand returns to a hero's welcome. His valour is rewarded by wealth and land by Oswald, King of Northumbria.

Exhausted, he retires to his new estate with his bride only to find himself surrounded once again by enemies old and new. With treachery and death on all sides, Beobrand fears he will lose all he holds dear.

On a quest for revenge and redemption, he accepts the mantle of lord, leading his men into the darkest of nights and the bloodiest of battles.

The Cross and the Curse is the second gripping, action-packed instalment in The Bernicia Chronicles.

'Murder, betrayal and vengeance fuel tribal warfare and personal combat. Beobrand is the warrior to follow' -- David Gilman
'A tale that rings like sword song in the reader's mind. Harffy knows his genre inside out and The Cross and the Curse proves it' -- Giles Kristian
'Matthew Harffy has created a gritty, authentic world, home to a hero who shows us the complexity of what it means to be human - the darkness and the delight. The Cross and the Curse is historical fiction at its finest' -- Stephanie Churchill
Matthew grew up in Northumberland where the rugged terrain, ruined castles and rocky coastline had a huge impact on him. He now lives in Wiltshire, England, with his wife and their two daughters.
GOR009531999
9781786696274
1786696274
The Cross and the Curse by Matthew Harffy
Matthew Harffy
Used - Very Good
Paperback
Head of Zeus
2018-05-03
400
N/A
Book picture is for illustrative purposes only, actual binding, cover or edition may vary.
This is a used book - there is no escaping the fact it has been read by someone else and it will show signs of wear and previous use. Overall we expect it to be in very good condition, but if you are not entirely satisfied please get in touch with us
Trustpilot