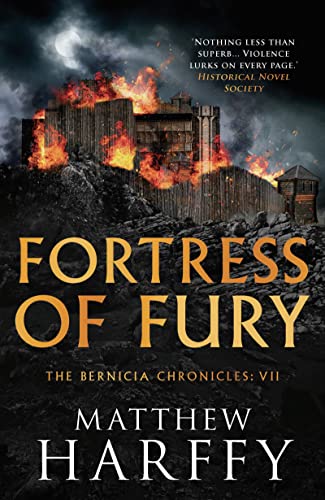 Fortress of Fury by Matthew Harffy

AD 647. Anglo-Saxon Britain. A gripping, action-packed historical thriller and the seventh instalment in the Bernicia Chronicles.

Fortress of Fury by Matthew Harffy

Beobrand is besieged in the action-packed instalment in the Bernicia Chronicles set in AD 647 Anglo-Saxon Britain.

War hangs heavy in the hot summer air as Penda of Mercia and his allies march into the north. Caught unawares, the Bernician forces are besieged within the great fortress of Bebbanburg.

It falls to Beobrand to mount the defence of the stronghold, but even while the battle rages, old and powerful enemies have mobilised against him, seeking vengeance for past events.

As the Mercian forces tighten their grip and unknown killers close in, Beobrand finds himself in a struggle with conflicting oaths and the dreadful pull of a forbidden love that threatens to destroy everything he holds dear.

With the future of Northumbria in jeopardy, will Beobrand be able to withstand the powers that beset him and find a path to victory against all the odds?

Love these historical thrillers? Pre-order A Time for Swords today - the start of an exciting new series from bestselling author of the Bernicia Chronicles, Matthew Harffy.

'Nothing less than superb ... The tale is fast paced and violence lurks on every page' Historical Novel Society.

'A tale that rings like sword song in the reader's mind' Giles Kristian.

'Historical fiction doesn't get much better than this' Angus Donald.

'A brilliant characterization of a difficult hero in a dangerous time. Excellent!' Christian Cameron.

'A terrific novel. It illuminates the Dark Ages like a bolt of lightning' Toby Clements.

'Harffy's writing just gets better and better ... He is really proving himself the rightful heir to Gemmell's crown' Jemahl Evans.

'Harffy has a real winner on his hands ... A genuinely superb novel' Steven McKay.

'A breathtaking novel that sweeps the reader into a dark and dangerous world' Paul Fraser Collard.

PRAISE FOR THE BERNICIA CHRONICLES:
'Matthew Harffy's tale of England in the Dark Ages is nothing less than superb ... The tale is fast paced and violence lurks on every page' Historical Novel Society.
'A tale that rings like sword song in the reader's mind. Harffy knows his genre inside out and The Cross and the Curse proves it' Giles Kristian.
'Murder, betrayal and vengeance fuel tribal warfare and personal combat. Beobrand is the warrior to follow' David Gilman.
'Historical fiction doesn't get much better than this' Angus Donald, author of The Outlaw Chronicles.
'I was gripped from the very first sentence ... I thoroughly recommend it for all historical fiction readers' Martin Lake.

Matthew Harffy grew up in Northumberland where the rugged terrain, ruined castles and rocky coastline had a huge impact on him. He now lives in Wiltshire, England, with his wife and their two daughters. @MatthewHarffy www.matthewharffy.com

GOR011088249
Fortress of Fury by Matthew Harffy
Matthew Harffy
The Bernicia Chronicles
Used - Like New
Hardback
Head of Zeus
2020-10-01
432
1786696347
9781786696342
N/A
Book picture is for illustrative purposes only, actual binding, cover or edition may vary.
The book has been read, but looks new. The book cover has no visible wear, and the dust jacket is included if applicable. No missing or damaged pages, no tears, possible very minimal creasing, no underlining or highlighting of text, and no writing in the margins
Trustpilot