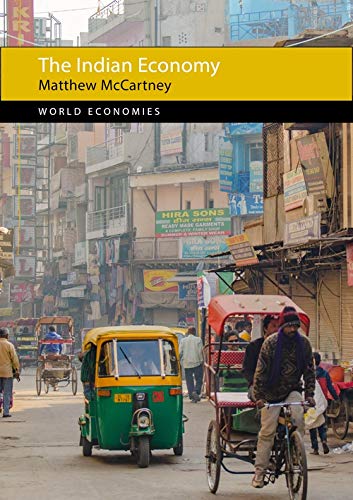 The Indian Economy
by Matthew McCartney (University of Oxford)

In Stock
14,99 £
This new title in the World Economies series charts and explains the development of the Indian economy since independence and partition and provides a unique up-to-date overview of the contemporary Indian economy and the reasons it has assumed its current form.
Very Good
Only 1 left

The Indian Economy by Matthew McCartney (University of Oxford)

The Indian economy has undergone dramatic changes over recent decades encompassing episodes of rapid growth and stagnation. It is a complex economic story that stretches back to the seismic events of 1947. This book charts the development of the Indian economy since independence and partition, and provides a rigorous presentation of India's contemporary political economy.

As well as providing a comprehensive survey of the main features of the Indian economy, the book critically examines key debates surrounding the country's economic trajectory, in particular those that link it to the dominance of particular class interests, and those that argue that India's economic growth has not delivered equivalent welfare gains. Throughout, the book uses revealing case studies of poverty and inequality, of education, health, work and gender issues to outline the human story behind the economic figures and performance indicators. The economic impact of internal geography, regional diversity and discrimination is also assessed. The distinct, and sometimes puzzling, features of India's political economy are explored, including the significance of the service sector, a weakening state, and the democratic failure of public service delivery.

The book offers an authoritative overview of the contemporary Indian economy suitable for students seeking an introduction to this most diverse of economies.

About Matthew McCartney (University of Oxford)

GOR010238112
The Indian Economy by Matthew McCartney (University of Oxford)
Matthew McCartney (University of Oxford)
World Economies
Used - Very Good
Paperback
Agenda Publishing
2019-07-25
288
1788210093
9781788210096
N/A
Book picture is for illustrative purposes only, actual binding, cover or edition may vary.
This is a used book - there is no escaping the fact it has been read by someone else and it will show signs of wear and previous use. Overall we expect it to be in very good condition, but if you are not entirely satisfied please get in touch with us.