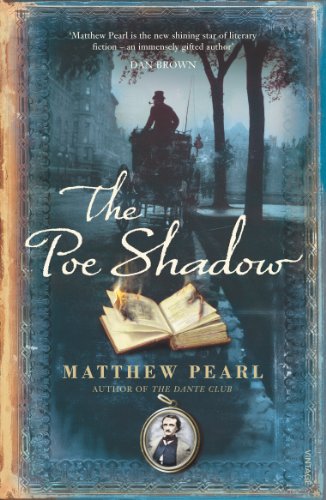 The Poe Shadow
by Matthew Pearl

In Stock
£4.49
But just when Poe's death looks destined to remain a mystery, Quentin seeks out the one person who can solve this strange case: the real-life model for Poe's brilliant fictional detective character, C.
Very Good Good
Only 1 left

The Poe Shadow by Matthew Pearl

Baltimore, 1849. The body of Edgar Allan Poe has been buried in an unmarked grave. The conclusion that Poe was a second-rate writer who died a drunkard is accepted by all. But none of this deters Quentin Clark, an ardent admirer who risks his own career and reputation in a passionate crusade to salvage Poe's. Clark discovers that Poe's last days are riddled with vital unanswered questions. But just when Poe's death looks destined to remain a mystery, Quentin seeks out the one person who can solve this strange case: the real-life model for Poe's brilliant fictional detective character, C. Auguste Dupin. Having successfully recruited the man he believes to have inspired Poe's Dupin, Clarke is confronted by another claiming to be the true model. The two master detectives each seek to prove he is the real 'Dupin' by solving the mystery of Poe's death. Clark finds himself enmeshed in sinister machinations involving international political agents, a female assassin, the corrupt Baltimore slave trade and the lost secrets of Poe's final hours. With his own future hanging in the balance, he must turn master investigator himself to unchain his now imperilled fate from that of Poe.

"An imaginative, clever and satisfying literary detective story, bristling with the sights, smells and sounds of 19th century Baltimore - a real treat for Poe fans" -- Kate Mosse, author of Labyrinth
"Pearl does an ingenious job of shedding new light on the puzzle...brilliantly evokes the kind of dedication that Poe still enjoys" -- Alice Fordham * The Times *
"An absorbing combination of cerebral twists and visceral turns" * Daily Mail *
"Genuinely thrilling... An unusually arresting piece of crime fiction" * Daily Telegraph *
"A mind-twisting literary thriller...With nefarious characters, a Machiavellian plot and a denouement monologue to wow even Hercule Poirot, The Poe Shadow will keep you guessing" -- Daniel Steffans * Time Out *

Matthew Pearl is the internationally bestselling author of The Dante Club, published in more than thirty languages and forty countries. His other books include The Poe Shadow and The Last Dickens. Pearl is a graduate of Harvard University and Yale Law School and has taught literature at Harvard and at Emerson College. He lives in Cambridge, Massachusetts.

GOR000760427
The Poe Shadow by Matthew Pearl
Matthew Pearl
Used - Very Good
Paperback
Vintage Publishing
2007-01-04
384
0099478226
9780099478225
N/A
Book picture is for illustrative purposes only, actual binding, cover or edition may vary.
This is a used book - there is no escaping the fact it has been read by someone else and it will show signs of wear and previous use. Overall we expect it to be in very good condition, but if you are not entirely satisfied please get in touch with us.