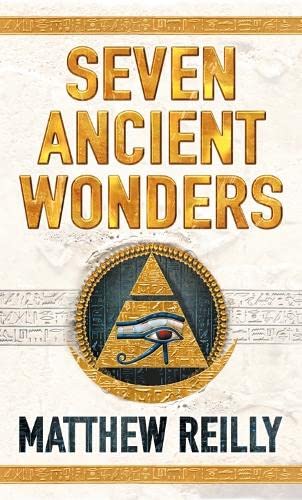 In Stock
£4.49
The bestselling author of Scarecrow and Area 7 takes us on a thrilling, non-stop treasure hunt across the world
Very Good Good
8 in stock

It is the biggest treasure hunt in history with contesting nations involved in a headlong race to locate the Seven Wonders of the Ancient World.

4500 years ago, a magnificent golden capstone sat at the peak of the Great Pyramid of Giza. It was a source of immense power, reputedly capable of bestowing upon its holder absolute global power. But then it was divided into seven pieces and hidden, each piece separately, within the seven greatest structures of the age.

Now it's 2006 and the coming of a rare solar event means it's time to locate the seven pieces and rebuild the capstone. Everyone wants it - from the most powerful countries on Earth to gangs of terrorists . . . and one daring coalition of eight small nations. Led by the mysterious Captain Jack West Jr, this determined group enters a global battlefield filled with booby-trapped mines, crocodile-infested swamps, evil forces and an adventure beyond imagining.

GOR000365044
Seven Ancient Wonders by Matthew Reilly
Matthew Reilly
Used - Very Good
Paperback
Pan Macmillan
2006-08-04
544
0330426575
9780330426572
N/A
Book picture is for illustrative purposes only, actual binding, cover or edition may vary.
This is a used book - there is no escaping the fact it has been read by someone else and it will show signs of wear and previous use. Overall we expect it to be in very good condition, but if you are not entirely satisfied please get in touch with us.