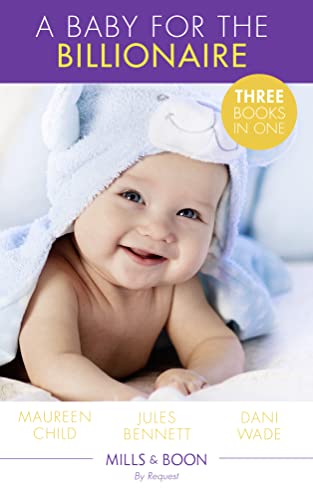 A Baby For The Billionaire
by Maureen Child

A Baby For The Billionaire

A Baby For The Billionaire Summary

A Baby For The Billionaire: Triple the Fun / What the Prince Wants / The Blackstone Heir by Maureen Child

A Baby For The Billionaire

He's a captain of industry, a brooding billionaire, and-a daddy? When Connor King learns he has fathered triplets, he feels double-crossed. Now nothing will stand in the way of claiming his heirs, not even their alluring legal guardian, Dina Cortez.

What The Prince Wants

Widowed Prince Mikos Colin Alexander wants to raise his little girl out of the spotlight. Granted a six-month leave from his royal duties, he escapes to Los Angeles, posing as a regular guy in need of a live-in nanny. Is Darcy Cooper the answer he's looking for?

When Jacob Blackstone sees his former flame holding a baby with the Blackstone blond curls, the Southern millionaire knows the child is his. But why would down-on-her-luck bartender KC Gatlin keep Jacob's heir a secret?

Customer Reviews - A Baby For The Billionaire

Maureen Child is the author of more than 130 romance novels and novellas that routinely appear on bestseller lists and have won numerous awards, including the National Reader's Choice Award. A seven-time nominee for the prestigous RITA award from Romance Writers of America, one of her books was made into a CBS-TV movie called THE SOUL COLLECTER. Maureen recently moved from California to the mountains of Utah and is trying to get used to snow. USA TODAY Bestselling Author Jules Bennett has penned more than 50 novels during her short career. She's married to her high school sweetheart, has two active girls, and is a former salon owner. Jules can be found on Twitter, Facebook (Fan Page), and her website julesbennett.com. She holds contests via these three outlets with each release and loves to hear from readers! Dani Wade astonished her local librarians as a teenager when she carried home 10 books every week-and actually read them all. Now she writes her own characters who clamor for attention in the midst of the chaos that is her life. Residing in the southern U.S. with a husband, two kids, two dogs, and one grumpy cat, she stays busy until she can closet herself away with her characters once more.

GOR009603674
A Baby For The Billionaire: Triple the Fun / What the Prince Wants / The Blackstone Heir by Maureen Child
Maureen Child
Used - Very Good
Paperback
HarperCollins Publishers
2018-12-13
560
0263274713
9780263274714
N/A
Book picture is for illustrative purposes only, actual binding, cover or edition may vary.
This is a used book - there is no escaping the fact it has been read by someone else and it will show signs of wear and previous use. Overall we expect it to be in very good condition, but if you are not entirely satisfied please get in touch with us.