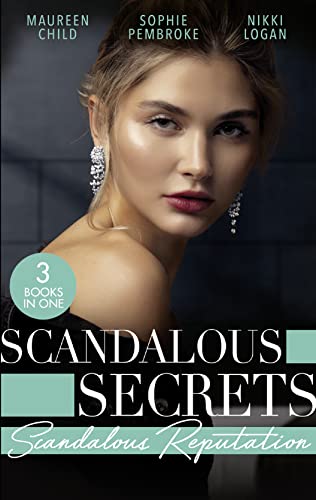 Scandalous Secrets: Scandalous Reputation: To Kiss a King (Kings of California) / A Groom Worth Waiting For / Rapunzel in New York by Maureen Child

Security expert Garrett King has been covertly hired to protect Princess Alexis who has escaped her castle to look for independence and true love. As he bodyguard she's off limits. As a confirmed bachelor, he doesn't do happily ever after...but one kiss from a princess could change everything.
*
Thea has everything a bride wants: A Tuscan wedding, the perfect dress, a handsome groom...and her wedding will unite two families. So why is it only when her groom's brother Zeke Ashton arrives that things start feeling right? And who will be the groom under this Tuscan sun?
*
When Nathan Archer 'rescues' Viktoria Morfitt, he doesn't realise she needs no help. Or that he'll end up working with her. As attraction simmers between them, both are hiding secrets that have haunted them for years... but can they let go of the past or will the secrets ruin their future?

Maureen Child is the author of more than 130 romance novels and novellas that routinely appear on bestseller lists and have won numerous awards, including the National Reader's Choice Award. A seven-time nominee for the prestigous RITA award from Romance Writers of America, one of her books was made into a CBS-TV movie called THE SOUL COLLECTER. Maureen recently moved from California to the mountains of Utah and is trying to get used to snow. Sophie Pembroke has been dreaming, reading and writing romance ever since she read her first Mills & Boon novel as a teen, so getting to write romance fiction for a living is a dream come true! Born in Abu Dhabi, Sophie grew up in Wales and now lives in Herfordshire with her scientist husband, her incredibly imaginative daughter and her adventurous, adorable little boy. In Sophie's world, happy is for ever after, everything stops for tea and there's always time for one more page. Nikki Logan lives amongst a string of wetlands in Australia with her partner and a menagerie of animals. Her stories are full of romance in descriptive, natural environments. She believes the richness and danger of wild places perfectly mirror the passion and risk of falling in love. Nikki authored her first romance on a sabbatical from work. Determined to be published by forty, her first book hit shelves in February 2010, her fortieth year, and she hasn't looked back since.

GOR010844277
Scandalous Secrets: Scandalous Reputation: To Kiss a King (Kings of California) / A Groom Worth Waiting For / Rapunzel in New York by Maureen Child
Maureen Child
Used - Very Good
Paperback
HarperCollins Publishers
2020-08-06
560
0263282074
9780263282078
N/A
Book picture is for illustrative purposes only, actual binding, cover or edition may vary.
This is a used book - there is no escaping the fact it has been read by someone else and it will show signs of wear and previous use. Overall we expect it to be in very good condition, but if you are not entirely satisfied please get in touch with us.