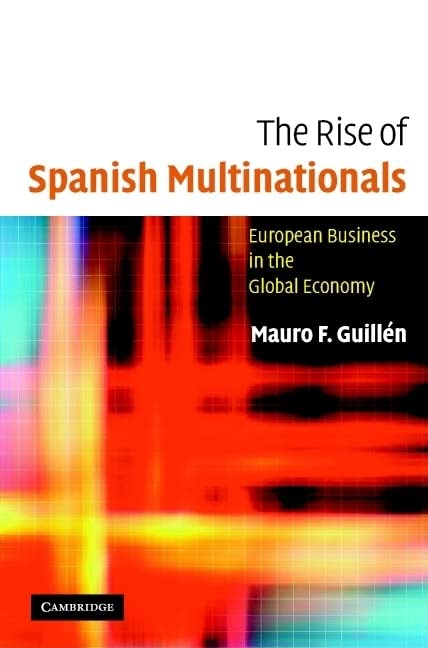 The Rise of Spanish Multinationals
by Mauro F. Guillena

In Stock
£5.99
Since 1992, Spanish companies in a variety of industries have acquired a prominent presence in the global economy. This 2005 text offers not only an explanation of why this has happened, but also an assessment of the economic, financial, political and social consequences for Spain and for Europe.
Very Good Good
Only 1 left

The Rise of Spanish Multinationals Summary

The Rise of Spanish Multinationals: European Business in the Global Economy by Mauro F. Guillena

Since 1992, Spanish companies in a variety of industries have acquired a prominent presence in the global economy, especially in Latin America and Europe. Companies such as Telefonica, Banco Santander, Repsol-YPF and Inditex (the owner of the Zara brand) have catapulted themselves to become major international competitors, making Spain one of the world's ten largest foreign direct investors. Mauro Guillen offers not only an explanation of why this has happened, but also an assessment of the economic, financial, political and social consequences for Spain and for Europe. In this 2005 analysis, he also addresses the weaknesses of the Spanish multinationals, especially their lack of proprietary technology and their primary focus on Latin America. The book concludes with the argument that the Spanish multinational firms ought to consolidate their European positions through mergers and acquisitions, opening up new possibilities for further expansion in North America and Asia.

The Rise of Spanish Multinationals Reviews

Review of the hardback: 'This fascinating book constitutes the best documented and richest analysis to date of the economic, social and political causes and repercussions for both Spain and Europe of the rise of the Spanish multinational firm. Of great value not just to readers interested in the Spanish economy but also to all those who want to better understand the process of globalization.' Jose Vinals, Director General, Bank of Spain
Review of the hardback: 'A pioneering analysis of an important and recent development in the Spanish economy; comprehensive and grounded in solid analysis. Although some of Guillen's ideas will be controversial, the book sheds light on existing problems and raises new issues. An essential book in the field of multinational management.' Oscar Fanjul, former Chairman and CEO, Repsol, and Vice-Chairman, Omega Capital
Review of the hardback: 'An outstanding blend of sociological and economic analysis: lively, insightful, very readable; it is both thought-provoking and well-argued.' Javier Santisco, Chief Economist for Latin America, Banco Bilbao Vizcaya Argentina
Review of the hardback: 'Professor Guillen provides a very complete and insightful analysis of one of the most outstanding episodes in recent Spanish economic history. This book also constitutes a useful empirical counterpoint to the modern theory of the multinational enterprise.' Emilio Ontiveros, Universidad Autonoma de Madrid, and CEO of AFI (Analistas Financieros Internacionales)
Review of the hardback: 'This is a rigorous history and analysis of the process of internationalization of Spanish firms. Their vigorous expansion abroad is a signal to the world that Spain possesses formidable organizational and managerial capabilities.' Alvaro Cuervo, Complutense University of Madrid, and board member, ACS-Dragados
Review of the hardback: 'At a time when Spanish foreign direct investment levels have finally caught up with those for other high-income countries, Mauro Guillen takes a closer look at the quality as opposed to quantity of such investments. His provocative conclusions should be of interest not just in specific regard to Spanish firms investing overseas but in the broader context of the debate about late internationalization.' Pankaj Ghemawat, Harvard Business School
Review of the hardback: 'Guillen offers a fascinating account of Spain's reversal of fortune over the last decade from buyout target to a visible player in the global economy together with an insightful analysis of how this new position is reshaping Spain's self image, its views toward globalization and big business, and its actions in the international arena.' Donald Lessard, MIT Sloan School of Management
Review of the hardback: 'A well-researched and fascinating book that should be of great interest to any student of multinational enterprises.' Jose R. de la Torre, Dean, Chapman Graduate School of Business, Florida International University
Review of the hardback: 'There is nothing more effective than good theory and good data to counter myth and challenge misleading popular belief. Guillen's masterful combination of theory and data about the recent history of Spanish multinationals offers the most compelling interpretation of the international expansion of the Spanish economy that is available. A must for anyone interested in the fascinating evolution of the Spanish economy.' Angel Cabrera, President, Thunderbird-The Garvin School of International Management

'There is probably no more serious analysis of the Spanish multinational phenomena than this work.... This will be a much-discussed and cited book, and deservedly so. It focuses on a decisive process for the economy and society of twenty-first-century Spain. The book's final proposal, for the "'Europeanization' of Spain's Latin-American economic interest" (p. 231) will, it is hoped, give rise to much research and will help provide answers to the questions raised. And I eagerly await Guillen's nest discussion on the topic." -Montserrat Pallares-Barbera, Economic Geography
'Mauro Guillen...demonstrates that the relationship between economic sociology and business history can be fruitful...Guillen has written a profound...essay on Spain's social and economic development, analyzed the main weaknesses of Spanish multinationals, and outlined a research agenda for business historians who are interested in the internationalization of Spanish firms." -Nuria Puig, Universidad Complutense de Madrid, Spain, Business History Review
"The Rise of Spanish Multinationals is a must-read for sociologists of organizations, for students of globalization, and for business management executives. It conveys a tremendous amount of information in about two hundred pages and is extremely well organized and written. The book provides a magnificent opportunity to reflect on the opportunities and challenges of globalization for mid-size economies such as Spain's." -Juan Diez Medrano, Department of Sociological Theory, University of Barcelona, Administrative Science Quarterly

Mauro F. Guillen holds the Dr Felix Zandman Endowed Professorship in International Management at the Wharton School of the University of Pennsylvania, and the Fundacion Rafael del Pino Chair, which funded this research. An expert on globalization and on the multinational firm, he is a visiting faculty at Instituto de Empresa, Guggenheim fellow and Member in the Institute for Advanced Study, Princeton.

GOR003551704
The Rise of Spanish Multinationals: European Business in the Global Economy by Mauro F. Guillena
Mauro F. Guillena
Used - Very Good
Hardback
Cambridge University Press
2005-07-28
278
0521847214
9780521847216
N/A
Book picture is for illustrative purposes only, actual binding, cover or edition may vary.
This is a used book - there is no escaping the fact it has been read by someone else and it will show signs of wear and previous use. Overall we expect it to be in very good condition, but if you are not entirely satisfied please get in touch with us.