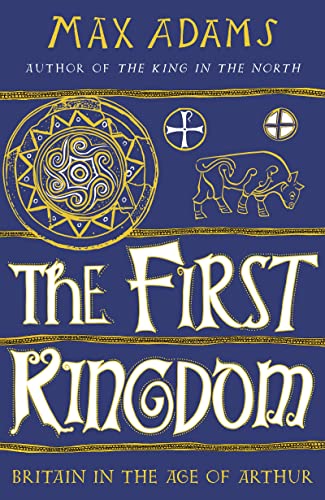 The First Kingdom by Max Adams

An investigation of the obscure centuries that followed the departure of the Romans from Britain.

The First Kingdom: Britain in the age of Arthur by Max Adams

The bestselling author of The King in the North turns his attention to the obscure era of British history known as 'the age of Arthur'.

Somewhere in the shadow time between the departure of the Roman legions in the early fifth century and the arrival in Kent of Augustine's Christian mission at the end of the sixth, the kingdoms of Early Medieval Britain were formed. But by whom? And out of what?

In The First Kingdom, Max Adams scrutinizes the narrative of this period handed down to us by later historians and chroniclers. Stripping away the more lurid claims made for a warrior-hero named Arthur, he synthesises the research carried out over the last forty years to tease out the strands of reality from the myth. He reveals how archaeology has delivered evidence of a diverse and dynamic response to Britain's new-found independence, of material and intellectual trade between the Atlantic islands and the rest of Europe, and of the environmental context of those centuries.

A skilfully wrought and intellectually probing investigation of the most mysterious epoch in our history, The First Kingdom presents an image of post-Roman Britain whose resolution is high enough to show the emergence of distinct political structures in the sixth century - polities that survive long enough to be embedded in the medieval landscape, recorded in the lines of river, road and watershed, and memorialised in place names.

'Not just a valuable book, but a distinctive one as well' Tom Holland, Sunday Times

'Adams' overview is deeply immersed in the landscape of early medieval Britain ... The whole presents a very useful reference, and an enjoyable read' Current Archaeology

'A worthy synthesis of what little we know' Gerard de Groot, The Times

'Not just a valuable book, but a distinctive one as well' -- Tom Holland, Sunday Times
'An engagingly written exploration of these 'fragments', synthesising archaeological and historical research from the last four decades, and applying a critical eye to traditional narratives passed down by medieval chroniclers and later accounts' * Current World Archaeology *
'Adams is a synthesiser, a noble pursuit often derided within academia, where praise is instead heaped on original research. He has read assiduously the arcane studies written for a specialist audience and condensed them into an accessible and illuminating book, studiously avoiding the temptation to fictionalise when facts are scarce' -- Gerard de Groot, The Times
Max Adams is a writer, archaeologist and woodsman whose work explores themes of landscape, knowledge and human connectedness with the earth. He is the author of Admiral Collingwood, Aelfred's Britain, Trees of Life, the bestselling The King in the North and In the Land of Giants. He has lived and worked in the North-East of England since 1993.
NGR9781788543477
9781788543477
1788543475
The First Kingdom: Britain in the age of Arthur by Max Adams
Max Adams
New
Hardback
Head of Zeus
2021-02-04
480
N/A
Book picture is for illustrative purposes only, actual binding, cover or edition may vary.
This is a new book - be the first to read this copy. With untouched pages and a perfect binding, your brand new copy is ready to be opened for the first time
Trustpilot