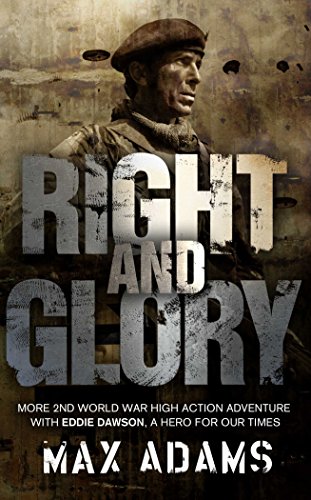 Right and Glory by Max Adams

Right and Glory by Max Adams

Dawson and Major Sykes are sent to Eben Emael in Belgium, the strongest fort in the world, completely impregnable. That night, activity in the village wakes them, and they return to the fort and witness a group of German soldiers land on the roof in gliders to assault it. The main attack lasts 20 minutes, leaving Eben Emael crippled. And Dawson is disturbed - he has seen the Germans do what he thought impossible - blasting holes through solid 12 inch steel armour plating using some kind of new demolition charge.

Sykes realizes that new German secret weapon could have enormous implications for the allies, affecting everything from the design of tanks, armoured buildings, even battleships. The two men manage to get back inside the fort and retrieve one. On their escape, Sykes is wounded in the leg, but Dawson devises a plan and manages to get Sykes out on a stretcher, with the demolition charge slung underneath it.

But when they eventually manage to battle their way to the Belgian lines, Eddie Dawson will face an epic attempt to make it to Dunkirk, while the German fighters and bombers do their best to kill them all.

Max Adams, who worked in covert operations for a time, now lectures on diverse historical subjects and divides his time between the UK and Andorra with his wife.
GOR002932068
9780330510349
0330510347
Right and Glory by Max Adams
Max Adams
Used - Very Good
Paperback
Pan Macmillan
2011-05-06
400
N/A
Book picture is for illustrative purposes only, actual binding, cover or edition may vary.
This is a used book - there is no escaping the fact it has been read by someone else and it will show signs of wear and previous use. Overall we expect it to be in very good condition, but if you are not entirely satisfied please get in touch with us
Trustpilot