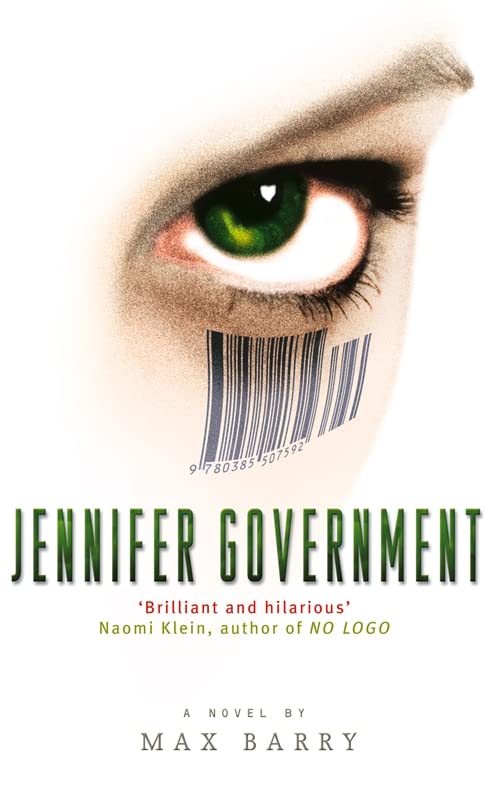 In Stock
£5.49
Described by Naomi Klein as 'Brilliant and hilarious', JENNIFER GOVERNMENT is a wickedly funny thriller for the NO LOGO generation.
Very Good
10 in stock

In Max Barry's twisted, hilarious and terrifying vision of the near future, the world is run by giant corporations and employees take the last names of the companies they work for. It's a globalised, ultra-capitalist free market paradise!

Hack Nike is a lowly merchandising officer who's not very good at negotiating his salary. So when John Nike and John Nike, executives from the promised land of Marketing, offer him a contract, he signs without reading it. Unfortunately, Hack's new contract involves shooting teenagers to build up street cred for Nike's new line of $2,500 trainers. Hack goes to the police - but they assume that he's asking for a subcontracting deal and lease the assassination to the more experienced NRA.

Enter Jennifer Government, a tough-talking agent with a barcode tattoo under her eye and a personal problem with John Nike (the boss of the other John Nike). And a gun. Hack is about to find out what it really means to mess with market forces.

A total blast ... funny and clever * NEW YORK TIMES *
Frightening and funny ... a riotous satirical rant * ENTERTAINMENT WEEKLY *
Wicked and wonderful * THE WASHINGTON POST *
The most fun you'll find in a book store this year * TIME OUT, NEW YORK *

Max Barry was born in 1973 and lives in Melbourne, Australia. A former marketing executive, he now writes full-time - the advantage being that he can do it while wearing only boxer shorts.

GOR001105838
Jennifer Government by Max Barry
Max Barry
Used - Very Good
Paperback
Little, Brown Book Group
2004-02-05
352
0349117624
9780349117621
N/A
Book picture is for illustrative purposes only, actual binding, cover or edition may vary.
This is a used book - there is no escaping the fact it has been read by someone else and it will show signs of wear and previous use. Overall we expect it to be in very good condition, but if you are not entirely satisfied please get in touch with us.