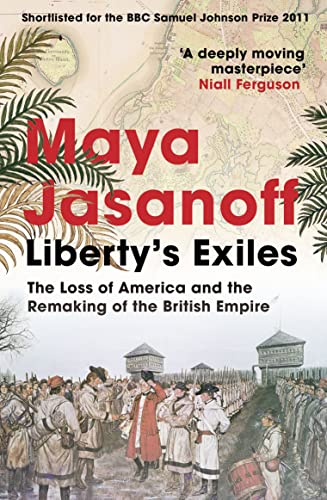 `More than just a work of first-class scholarship, Liberty's Exiles is a deeply moving masterpiece that fulfils the historian's most challenging ambition: to revivify past experience.' Niall Ferguson

Liberty's Exiles was shortlisted for the 2011 BBC Samuel Johnson Prize.

Liberty's Exiles: The Loss of America and the Remaking of the British Empire. by Maya Jasanoff

`More than just a work of first-class scholarship, Liberty's Exiles is a deeply moving masterpiece that fulfils the historian's most challenging ambition: to revivify past experience.' Niall Ferguson

Liberty's Exiles was shortlisted for the 2011 BBC Samuel Johnson Prize.

Early in the afternoon of 25 November 1783, the American Revolution was finally over; the British were gone, the patriots were back and a key moment inscribed itself in the annals of the emerging United States. Territorial independence from Great Britain had effectively begun.

In 'Liberty's Exiles', Maya Jasanoff examines the realities of the end of the Revolution, through looking at the lives of the Loyalist refugees - those men and women who took Britain's side. She tells the story of Elizabeth Johnston from Savannah, whose family went on to settle in St Augustine, Scotland, Jamaica and Nova Scotia; Reverend Jacob Bailey, who fled from New England across rough seas to Canada with his family and little more than the clothes on his back; five-year-old Catherine Skinner - the daughter of a loyalist - who was trapped as a prisoner in her home, hiding from the gunshots of rebel raiders. Their experiences speak eloquently of a larger history of exile, mobility and the shaping of the British Empire in the wake of the American War.

Beautifully written and rich with source material, 'Liberty's Exiles' is a history of the American Revolution unlike any before.

`Liberty's Exiles is a book which in scope and originality, global reach and research, intellectual curiosity and sheer provocative panache... can sustain comparison with Linda Colley or the young Simon Schama. The truth is Maya Jasanoff is not just a very good writer, an indefatigable researcher and a fine historian, she is also a bit of a genius.' William Dalrymple

`Stunning...[Jasanoff] delivers history on a grand canvas. This is a narrative of people, places and ideologies that never allows notions of empire to stand still' Daily Telegraph

`Enormously impressive...Not only has Maya Jasanoff found a previously unexplored and fascinating subject, her treatment of it may well prove to be definitive' Spectator

`Liberty's Exiles is not only a masterful historical study, it is also a jolly good read' The Times

`a fascinating subject...the story comes alive most vividly through the experiences of those few who left diaries, letters, memoirs' The Times

`Jasanoff's achievement in this vivid, superbly researched and high intelligent book is to skilfully weave together a mass of recent revisionist research on these men and women' The Guardian

"For the first time, a work of history follows in detail the diaspora of assorted slaves, colonists, American Indians and redcoats who threw in their lot with Britain and lost. Jasanoff undertakes a substantial revision of the received account of the war...her bold thesis is laid out with cast-iron sensibleness and a strong dose of humanity" The Times

Maya Jasanoff is Coolidge Professor of history at Harvard University. Her first book, Edge of Empire, was awarded the 2005 Duff Cooper Prize and was a book of the year selection in numerous publications including the Economist, Guardian and Sunday Times. Her second, Liberty's Exiles was shortlisted for the 2011 Samuel Johnson Prize (now Baillie Gifford). A 2013 Guggenheim Fellow, Jasanoff won the prestigious 2017 Windham-Campbell Prize for Non-Fiction. Her essays and reviews appear frequently in publications including The Guardian, The New York Times, and The New York Review of Books.

GOR004670038
Liberty's Exiles: The Loss of America and the Remaking of the British Empire. by Maya Jasanoff
Maya Jasanoff
Used - Very Good
Paperback
HarperCollins Publishers
2012-03-01
416
0007180101
9780007180103
N/A
Book picture is for illustrative purposes only, actual binding, cover or edition may vary.
This is a used book - there is no escaping the fact it has been read by someone else and it will show signs of wear and previous use. Overall we expect it to be in very good condition, but if you are not entirely satisfied please get in touch with us.