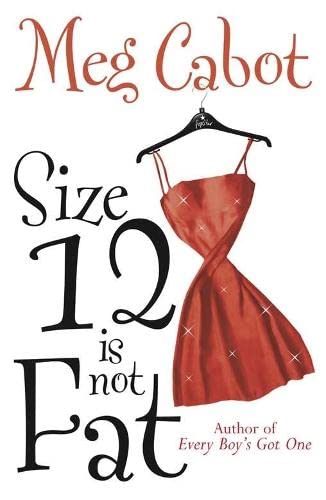 Size 12 is Not Fat
by Meg Cabot

Size 12 is Not Fat Summary

Size 12 is Not Fat by Meg Cabot

When you peak at fifteen, where can things go but downhill?

Former teen pop sensation Heather Wells has hit rock bottom: tired of singing other people's lyrics, she hasn't exactly been bombarded with recording contracts for her own songs. Worse, Dad's in jail, Mom's bolted for Buenos Aires, and Heather can't seem to stop drowning her sorrows in Kit Kat bars. To top it all, Heather's fiance Jordan Cartwright has replaced her - on the charts as well as in his bed - with America's newest number one pop sensation, Tania Trace.

When Heather finds a job in a New York college dorm--right around the corner from her temporary digs in her gorgeous friend Cooper's attic apartment - things seem to start looking up....at least until girls in the dorm begin to perish at an alarming rate. Elevator surfing is the official explanation from university administration, but Heather has other suspicions, and - enlisting a reluctant Cooper's aid - she attempts to get to the bottom of the rash of teen deaths in the building where she works, never knowing that it isn't her supper she'll be singing for this time, but quite possibly her life.

Meg Cabot is the author of The Princess Diaries series as well as several other series and bestselling novels for teenagers. Her books have sold millions of copies round the world. She has lived in various parts of the US and France, but now lives in Key West, Florida, with her husband and one-eyed cat, Henrietta.

GOR000429333
Size 12 is Not Fat by Meg Cabot
Meg Cabot
Heather Wells
Used - Very Good
Paperback
Pan Macmillan
2006-06-02
352
0330443933
9780330443937
N/A
Book picture is for illustrative purposes only, actual binding, cover or edition may vary.
This is a used book - there is no escaping the fact it has been read by someone else and it will show signs of wear and previous use. Overall we expect it to be in very good condition, but if you are not entirely satisfied please get in touch with us.