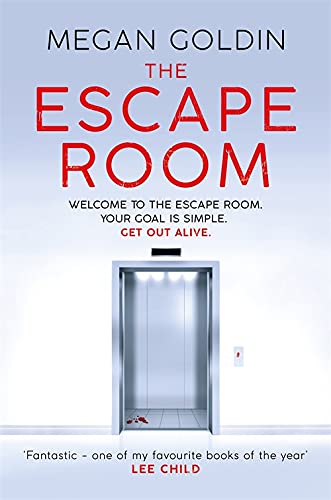 The Escape Room
by Megan Goldin

In Stock
£4.49
'Welcome to the escape room. Your goal is simple. Get out alive.' - a twisty locked-room mystery for readers of Lee Child, Harlan Coben and Linwood Barclay
Very Good Good
21 in stock

The Escape Room: 'One of my favourite books of the year' LEE CHILD by Megan Goldin

Welcome to the escape room. Your goal is simple. Get out alive.

In the lucrative world of Wall Street finance, Vincent, Jules, Sylvie and Sam are the ultimate high-flyers. Ruthlessly ambitious, they make billion-dollar deals and live lives of outrageous luxury. Getting rich is all that matters, and they'll do anything to get ahead.

When the four of them become trapped in an elevator escape room, things start to go horribly wrong. They have to put aside their fierce office rivalries and work together to solve the clues that will release them. But in the confines of the elevator the dark secrets of their team are laid bare. They are made to answer for profiting from a workplace where deception, intimidation and sexual harassment thrive.

Tempers fray and the escape room's clues turn more and more ominous, leaving the four of them dangling on the precipice of disaster. If they want to survive, they'll have to solve one more final puzzle: which one of them is a killer?

Praise for The Escape Room:

"Fantastic. One of my favourite books of the year." Lee Child

"Amazing...a thriller set in an elevator [that explores] the vast territory of people's worst natures. A nightmarish look inside ourselves. Simply riveting." Louise Penny

Cancel all your plans and call in sick; once you start reading, you'll be caught in your own escape room-the only key to freedom is turning the last page! This novel is pure entertainment. * Kirkus *
Spine-chilling stuff! * Irish Daily Mail *

Megan Goldin worked as a foreign correspondent for the ABC and Reuters in Asia and the Middle East, where she covered war zones and wrote about war, peace and international terrorism. After she had her third child, she returned to her hometown of Melbourne to raise her three sons and write fiction. She is the author of the acclaimed debut novel THE GIRL IN KELLERS WAY. THE ESCAPE ROOM is her second novel. You can see more about her and her work at www.megangoldin.com

GOR009938770
The Escape Room: 'One of my favourite books of the year' LEE CHILD by Megan Goldin
Megan Goldin
Used - Very Good
Paperback
Orion Publishing Co
2019-07-25
368
1409189252
9781409189251
N/A
Book picture is for illustrative purposes only, actual binding, cover or edition may vary.
This is a used book - there is no escaping the fact it has been read by someone else and it will show signs of wear and previous use. Overall we expect it to be in very good condition, but if you are not entirely satisfied please get in touch with us.