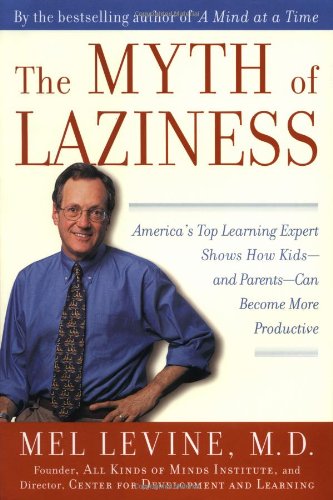 In Stock
£13.99
Dr. Mel Levine's revolutionary theory says that very few people are truly lazy. Rather, nearly all "lazy" children and unproductive adults suffer from "output failure"--a problem of the mind. "The Myth of Laziness" identifies the indicators of this failure and offers practical day-to-day strategies to increase a child's productivity.
Very Good
Only 2 left

Dr. Mel Levine shows that neurodevelopmental dysfunctions are often the true cause of perceived laziness in children and offers solutions.

How many times have you heard a teacher say that your child has tremendous potential "if only he'd just apply himself" or "if only she'd work just a little harder"? How often have you said the same thing to your son or daughter? Or perhaps you have a coworker who can't seem to finish anything; his reports are never in on time, or her projects are always behind schedule. No matter what excuses you hear, you suspect that laziness is the real reason for your colleague's low productivity.

Almost no one is actually lazy, says Dr. Mel Levine, author of the #1 national bestseller A Mind at a Time. Low productivity--whether in school or on the job--is almost always caused by a genuine problem, a neuro-developmental dysfunction. Despite this, untold numbers of people have been stigmatized by unfair accusations of laziness, many of them adults who still carry emotional scars from their school days.

In The Myth of Laziness Dr. Levine shows how we can spot the neurodevelopmental dysfunctions that may cause "output failure," as he calls it, whether in school or in the workplace. Dr. Levine identifies seven forms of dysfunction that obstruct output. Drawing on his years of clinical experience he describes eight people--children, adolescents, and adults--he has worked with who exhibited one or another of these problems. He shows how identifying the problem can make all the difference, leading to a course of corrective action rather than to accusations of laziness and moral failure. For example, a child who is unable to plan or to think ahead, who cannot consider different methods of accomplishing something or has difficulty making choices may wait until it is too late to complete an assignment or may act impulsively, creating a pattern of bad judgments and careless errors. Dr. Levine explains how such a child can be helped to learn how to plan ahead and weigh various alternatives. This sort of problem, if untreated, can persist into adulthood, where it can wreak far more havoc than in the classroom.

The Myth of Laziness explains the significance of writing as a key barometer of productivity during the school years. Because writing brings together so many neurodevelopmental functions--such as memory, motor control, organization, and verbalization of ideas--it can provide crucial clues to pinpoint the sources of output failure.

With its practical advice and its compassionate tone, The Myth of Laziness shows parents how to nurture their children's strengths and improve their classroom productivity. Most important, it shows how correcting these problems in childhood will help children live a fulfilling and productive adult life.

"Teacher" magazine Insightful...Levine's ideas, culled from his research and broad clinical experience, are as commonsensical and practical as they are wise.
"Newsweek" Mel Levine wants to revolutionize American education by showing...how children think.

Mel Levine, M.D., is professor of pediatrics at the University of North Carolina Medical School and director of its Clinical Center for the Study of Development and Learning. He is the founder and cochairman of All Kinds of Minds, a nonprofit institute for the understanding of differences in learning, and the author of two previous national best-selling books, A Mind at a Time and The Myth of Laziness. He and his wife, Bambi, live on Sanctuary Farm in North Carolina.

GOR003619130
Myth of Laziness: America's Top Learning Expert Shows How Kids--and Parents--Can Become More Productive by Mel Levine, MD
Mel Levine, MD
Used - Very Good
Hardback
Simon & Schuster
2003-01-01
352
074321367X
9780743213677
N/A
Book picture is for illustrative purposes only, actual binding, cover or edition may vary.
This is a used book - there is no escaping the fact it has been read by someone else and it will show signs of wear and previous use. Overall we expect it to be in very good condition, but if you are not entirely satisfied please get in touch with us.