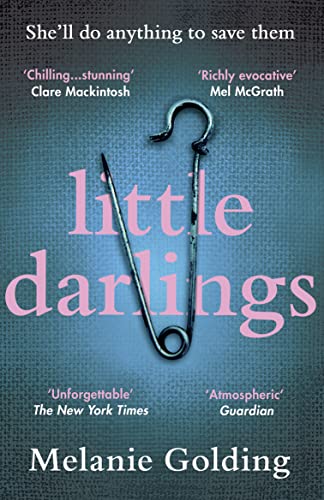 'Atmospheric and very creepy' The Guardian

'Unforgettable...One suspects that the real sorceress here is Golding, whose writing has given a voice to every wronged mother' The New York Times

'Taps into every woman's fear that she will not be believed' Mel McGrath, author of The Guilty Party

Behind the hospital curtain, someone is waiting . . .

A terrifying encounter in the middle of the night leaves Lauren convinced someone is trying to steal her new-born twins. Desperate with fear, she locks herself and her sons in the bathroom until the police arrive.

When DS Joanna Harper picks up the list of reported overnight incidents, she expects the usual calls from drunks and wrong numbers. But then a report of an attempted abduction catches her eye. The only thing is that it was flagged as a false alarm just fifteen minutes later. But Harper chooses to investigate anyway.

There's nothing on the CCTV, and yet Lauren claims that the woman is still after her children. No one will listen to Lauren - except Harper. And now Harper must ask herself, is Lauren mad, or does she see something no one else can?

'Every mother will see themselves in Lauren...taut with suspense'

'A disturbing and spine-chilling tale...This tale will keep readers on the edge of their seat'

'A unique, haunting story that stays with you long after finishing it'

'Atmospheric and very creepy' The Guardian

'Dark, richly evocative, tense and thought-provoking. Taps into every woman's fear that she will not be believed' Mel McGrath, author of The Guilty Party

'Rich and satisfying, this is part who-done-it, part fairy tale, part psychological thriller. It delivers on all fronts and will continue to rattle you, long after you have put it down' Felicity Everett, author of The People at Number 9

'Deep. Dark. Utterly addictive. I read this extraordinary book in one, breathless gulp...Be warned - you can't unread this story. It will haunt you' Teresa Driscoll, author of I Am Watching You

'A story that is in turn enthralling, creepy and downright sinister, Melanie Golding turns fairy tales on their heads...A brilliant, heart-pounding read' Lisa Hall, author of Between You and Me

'Viscerally creepy and compelling - a contemporary dark fairy tale that reeled me in like tales of old' Angela Clarke, author of Follow Me

'Riveting, terrifying and at times heartbreaking...Melanie Golding's disturbing portrait of a new mother's paranoia is superbly written, cleverly plotted and gruesomely beautiful in an unforgettable way. A stunning debut and a uniquely creepy premise' Annie Ward, author of Beautiful Bad

Melanie Golding is a recent graduate of the MA in Creative Writing at Bath Spa University, with distinction. Her short stories have been chosen to be recorded as podcasts by the Leicester-based festival Story City in 2015 and 2016, and to be performed at both the regular Stroud Short Stories event and their special 'best of' event at Cheltenham Literature Festival. In 2017 she won the short story prize at the Mid Somerset Festival, as well as the Evelyn Sanford trophy for highest mark in the prose class. She has taught creative writing in prisons and Young Offenders Institutions, as well as teaching music in a school for boys with social, emotional and behavioural difficulties. She is now a full-time registered childminder and splits her time between that and writing. Little Darlings is her debut novel and has been optioned for screen by Free Range Films, the team behind the adaptation of My Cousin Rachel.

GOR010353721
Little Darlings by Melanie Golding
Melanie Golding
Used - Like New
Paperback
HarperCollins Publishers
2020-02-06
336
0008293716
9780008293710
N/A
Book picture is for illustrative purposes only, actual binding, cover or edition may vary.
This is a used book - there is no escaping the fact it has been read by someone else and it will show signs of wear and previous use. Overall we expect it to be in very good condition, but if you are not entirely satisfied please get in touch with us.