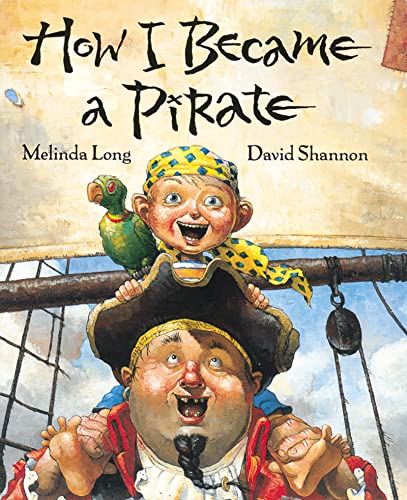 How I Became a Pirate
by Melinda Long

Out of Stock
£0.00
A Caldecott Honor-winning illustrator teams up with a witty storyteller for this hilarious pirate adventure starring a little boy who joins Braid Beard's crew on a fantastic voyage. Full color.
Very Good
Only 0 left

How I Became a Pirate Summary

How I Became a Pirate by Melinda Long

Pirates have green teeth--when they have any teeth at all. I know about pirates, because one day, when I was at the beach building a sand castle and minding my own business, a pirate ship sailed into view.So proclaims Jeremy Jacob, a boy who joins Captain Braid Beard and his crew in this witty look at the finer points of pirate life by the Caldecott Honor-winning illustrator David Shannon and the storyteller Melinda Long. Jeremy learns how to say "scurvy dog," sing sea chanteys, and throw food . . . but he also learns that there are no books or good night kisses on board: "Pirates don't tuck." A swashbuckling adventure with fantastically silly, richly textured illustrations that suit the story to a T.

How I Became a Pirate Reviews