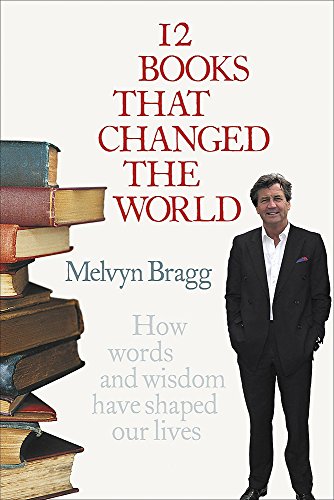 12 Books That Changed The World
by Melvyn Bragg

In Stock
£4.49
Melvyn Bragg explores a controversial selection of British books and their huge impact on history
Very Good
8 in stock

12 Books That Changed The World Summary

12 Books That Changed The World: How words and wisdom have shaped our lives by Melvyn Bragg

When we think of great events in the history of the world, we tend to think of war, revolution, political upheaval or natural catastrophe. But throughout history there have been moments of vital importance that have taken place not on the battlefield, or in the palaces of power, or even in the violence of nature, but between the pages of a book.

In our digitised age of instant information it is easy to underestimate the power of the printed word. In his fascinating new book accompanying the ITV series, Melvyn Bragg presents a vivid reminder of the book as agent of social, political and personal revolution. Twelve Books that Changed the World presents a rich variety of human endeavour and a great diversity of characters. There are also surprises. Here are famous books by Darwin, Newton and Shakespeare - but we also discover the stories behind some less well-known works, such as Marie Stopes' Married Love, the original radical feminist Mary Wollstonecraft's A Vindication of the Rights of Woman - and even the rules to an obscure ball game that became the most popular sport in the world . . .

12 Books That Changed The World Reviews

Bragg writes with passion...and once again, shows his capacity to make science and technology both exciting and accessible. * Independent *
'Bragg has established himself over the past decades as a fearlessly dedicated, popular educator . . . a highly and easily readable book.' * John Sutherland, The Sunday Times *
'It can charm almost anyone of any age . . . yet again Bragg has displayed his extraordinary and unique gifts as a communicator' * Christena Appleyard, Daily Mail *
'This is an inspiring, fascinating and stimulating book with marvellous illustrations' * Niall MacMonagle, Irish Times *

GOR001139731
12 Books That Changed The World: How words and wisdom have shaped our lives by Melvyn Bragg
Melvyn Bragg
Used - Very Good
Paperback
Hodder & Stoughton General Division
2007-02-01
384
0340839821
9780340839829
N/A
Book picture is for illustrative purposes only, actual binding, cover or edition may vary.
This is a used book - there is no escaping the fact it has been read by someone else and it will show signs of wear and previous use. Overall we expect it to be in very good condition, but if you are not entirely satisfied please get in touch with us.