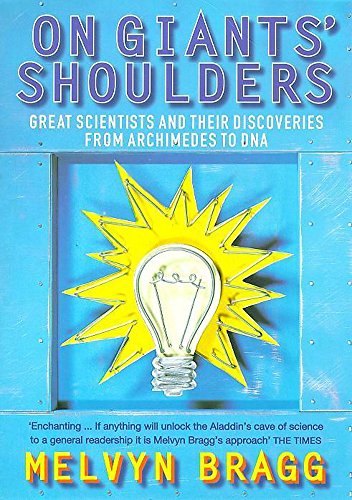 On Giants' Shoulders
by Melvyn Bragg

In Stock
£4.49
Bragg's bestselling account of the greatest figures and discoveries in the history of science from Archimedes to DNA
Very Good Good
Only 3 left

On Giants' Shoulders: Great Scientists and Their Discoveries from Archimedes to DNA by Melvyn Bragg

The fascinating story of science unfolds in this account of the lives and extraordinary discoveries of twelve of its greatest figures - Archimedes, Galileo, Newton, Lavoisier, Faraday, Darwin, Poincare, Freud, Einstein, Marie Curie and Crick and Watson. Exploring their impact and legacy with leading scientists of today including Stephen Jay Gould, Oliver Sacks, Lewis Wolpert, Susan Greenfield, Roger Penrose and Richard Dawkins, Melvyn Bragg illuminates the core issues of science past and present, and conveys the excitement and importance of the scientific quest.

'Enchanting ... if anything will unlock the Aladdin's cave of science to a general readership it is Melvyn Bragg's approach' * Lisa Jardine in The Times *

A fascinating exploration forthe lay reader into the leagacy of 12 of the greatest figures in science form Archimedes to Galileo an dNewton to Einstein, Crick and Watson with the help of leading contemporary scientists..
Publishing News 30 .10 .98

What a wonderful way to approach a difficult subject. Take 12 of the world's greatest scientists from Archimedes to Watson and then not only outline their scientific achievements but also discuss the implications with our present greatest... The consequence is a potted history and debate on the past and its influence on the present, resulting an enlightened view of science. Brilliant.
News Extra 30. 10. 98

...Bragg plays the part of the interested, intelligent layman, asking the questions on behalf of the reader, and since this is what he really is, the device works perfectly.
The Good Book Guide 11. 98

'It's hard to see how this volume, based on a Radio 4 series, could be improved on as an introduction to science. A dozen scientific greats, from Archimedes to Einstein, are dazzlingly illuminated by successors working in the same fields...Sparks fly between contributors on Darwin. This is science told with passion'
Independent on Saturday 13.2.99

'OGS is an informative, spirited guide to the history of science and the individuals who have shaped it, from Archimedes to Crick and Watson. Bragg encourages debate between leading scientists on the significance of science, its place in society through the ages and the impact of individual genius. Brief chronologies and a bibliography complement the concise, yet thorough, chapters...'
The Observer 21.3.99

'A stunningly simple idea...a populist, highly entertaining study of science past, present and future. The approach is genuinely invigorating and the contents are all set out in delicioius and highly digestible morsels. Recommended reading'
The Scotsman 6.3.99

'a Clever and illuminating approach...he rounds up the best contemporary science writers and challenges them to explain the importance of the "greats"'
Venue (Bristol) March 99

'A dozen scientific greats, from Archimedes to Einstein, are dazzlingly illuminated by contemporary experts in the same field.'
'Sparks fly between contributors on Darwin. This is science told with passion.'
(unknown)

GOR001049905
On Giants' Shoulders: Great Scientists and Their Discoveries from Archimedes to DNA by Melvyn Bragg
Melvyn Bragg
Used - Very Good
Paperback
Hodder & Stoughton General Division
1999-02-18
384
0340712600
9780340712603
N/A
Book picture is for illustrative purposes only, actual binding, cover or edition may vary.
This is a used book - there is no escaping the fact it has been read by someone else and it will show signs of wear and previous use. Overall we expect it to be in very good condition, but if you are not entirely satisfied please get in touch with us.