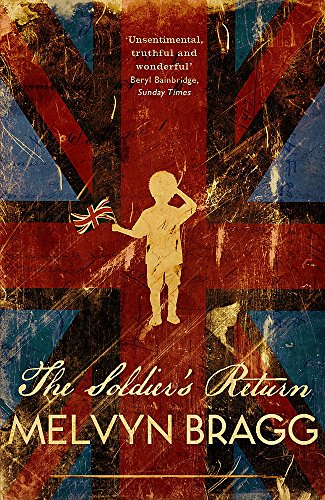 The Soldier's Return
by Melvyn Bragg

In Stock
£3.99
A profoundly moving and evocative novel set in post-war Cumbria
Very Good
Only 3 left

The Soldier's Return by Melvyn Bragg

When Sam Richardson returns in 1946 from the 'Forgotten War' in Burma to Wigton in Cumbria, he finds the town little changed. But the war has changed him, broadening his horizons as well as leaving him with traumatic memories. In addition, his six-year-old son now barely remembers him, and his wife has gained a sense of independence from her wartime jobs. As all three strive to adjust, the bonds of loyalty and love are stretched to breaking point in this taut, and profoundly moving novel.

Outstandingly good...Must be one of the best English novels of the last ten years. It rings true; its characters matter...utterly credible, utterly compelling, and very enjoyable * Scotsman *
[He] writes with tremendous empathy...One of the tautest and fiercest of Bragg's fictions * Independent *
Sympathetic, touching, infinitely believable...a highly accomplished novel * Literary Review *
Strong, straightforward, explicit, evocative * Daily Telegraph *
A great achievement * Guardian *
Reads like Lawrence...Feels like the book Bragg was born to write * Time Out *
His study of a relationship between man and wife in difficulties is brilliantly convincing...A passionately moving novel * Financial Times *
His masterpiece * Peter Kemp, Books of the Year, Sunday Times *

GOR001178266
The Soldier's Return by Melvyn Bragg
Melvyn Bragg
Used - Very Good
Paperback
Hodder & Stoughton General Division
2006-12-28
384
0340936304
9780340936306
N/A
Book picture is for illustrative purposes only, actual binding, cover or edition may vary.
This is a used book - there is no escaping the fact it has been read by someone else and it will show signs of wear and previous use. Overall we expect it to be in very good condition, but if you are not entirely satisfied please get in touch with us.