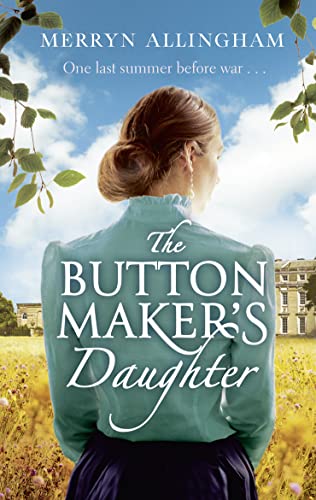 The Buttonmaker's Daughter
by Merryn Allingham

May, 1914. Nestled in Sussex, the Summerhayes mansion seems the perfect country idyll. But with a long-running feud in the Summers family and tensions in Europe deepening, Summerhayes' peaceful days are numbered.

The Buttonmaker's Daughter by Merryn Allingham

May, 1914. Nestled in Sussex, the Summerhayes mansion seems the perfect country idyll. But with a long-running feud in the Summers family and tensions in Europe deepening, Summerhayes' peaceful days are numbered.

For Elizabeth Summer, the lazy quiet of her home has become stifling. A chance meeting with Aiden Kellaway, an architect's assistant, offers the secret promise of escape. But to secure her family's future, Elizabeth must marry well. A man of trade falls far from her father's uncompromising standards.

As the sweltering heat of 1914 builds to a storm, Elizabeth faces a choice between family loyalty and an uncertain future with the man she loves.

One thing is definite: this summer will change everything.

Merryn Allingham was born into an army family and spent her childhood on the move. Unsurprisingly, it gave her itchy feet and in her twenties she escaped from an unloved secretarial career to work as cabin crew and see the world. The arrival of marriage, children and cats meant a more settled life in the south of England where she's lived ever since. It also gave her the opportunity to go back to `school' and eventually teach at university.

Merryn has always loved books that bring the past to life, so when she began writing herself the novels had to be historical. She finds the nineteenth and early twentieth centuries fascinating eras to research and her first book, The Crystal Cage, had as its background the London of 1851. The Daisy's War trilogy followed, set in India and London during the 1930s and 40s.

Her latest novels explore two pivotal moments in the history of Britain. The Buttonmaker's Daughter is set in Sussex in the summer of 1914 as the First World War looms ever nearer and its sequel, The Secret of Summerhayes, forty years later in the summer of 1944 when D Day led to eventual victory in the Second World War. Along with the history, of course, there is plenty of mystery and romance to keep readers intrigued.
If you would like to keep in touch with Merryn, sign up for her newsletter at www.merrynallingham.com

GOR008066686
The Buttonmaker's Daughter by Merryn Allingham
Merryn Allingham
Used - Very Good
Paperback
HarperCollins Publishers
2017-01-12
384
0008193835
9780008193836
N/A
Book picture is for illustrative purposes only, actual binding, cover or edition may vary.
The book has been read, but looks new. The book cover has no visible wear, and the dust jacket is included if applicable. No missing or damaged pages, no tears, possible very minimal creasing, no underlining or highlighting of text, and no writing in the margins.