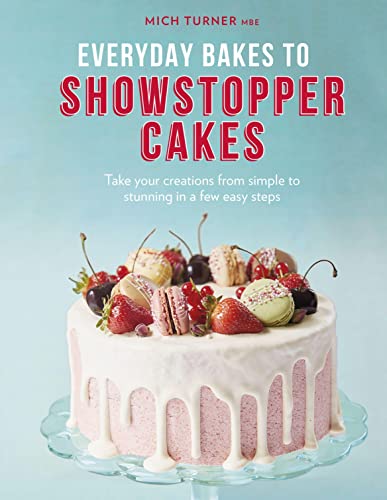 Celebrity baker Mich Turner brings together a collection of recipes to take you all the way from the delicious everyday through to the spectacular.

In Everyday Bakes to Showstopper Cakes, celebrity baker Mich Turner brings together a collection of recipes to take you all the way from the delicious everyday through to the spectacular. Starting out with simple cakes, biscuits and cupcakes, once you have mastered this first level, Mich provides you with a few extra steps to turn these into fabulous creations. If you're looking for more of a challenge or to elevate a favourite, these bakes are easily adapted to create a true showstopper cake. Covering a full range of bakery goods as well as perfect flavours, whether you are a novice baker or already know your rum baba from your roulade, you can be easily guided through these delicious bakes and simple but spectacular decoration techniques that make the most of wonderful flavours and perfect crumb.

Mich Turner, MBE, is founder of Little Venice Cake Company and is often described as the 'Queen of Couture Cakes', thanks to her multi-award-winning designs and A-list clientele. She has baked over 10,000 cakes including those for Her Majesty The Queen, Madonna, Pierce Brosnan, Ozzy Osbourne, Gordon Ramsay, David Beckham and Simon Cowell. Among her many awards and accolades, Mich was named Harper's Bazaar & CHANEL Entrepreneur of the Year 2006, and in 2010 she was honoured with an MBE for her services to the catering industry. Mich contributes to various publications and has written six international and bestselling books; Fantastic Party Cakes, Couture Wedding Cakes, Spectacular Cakes (Gourmand World Cookbook Awards 'Best Dessert Book' 2006), Mich Turner's Cake Masterclass: The Ultimate Guide to Cake Decorating Perfection, Mich Turner's Cake School: Expert Tuition from the Master Cake Maker and Have Your Cake and Eat It: Nutritious, Delicious Recipes for Healthier, Everyday Baking. Mich appears regularly on TV screens, including as a judge alongside Peter Sidwell in the hugely successful series Britain's Best Bakery (2012-2014), which was among ITV's top five best performing daytime shows in 2014.