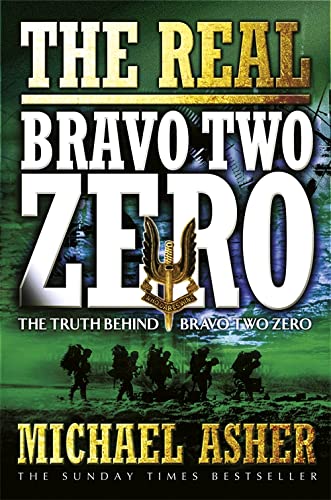 In Stock
£3.59
The true story of the most famous SAS operation in history.
Very Good
14 in stock

The true story of the most famous SAS operation in history.

'Bravo Two Zero' was the code-name of the famous SAS operation: a classic story of bravery in the face of overwhelming odds. BRAVO TWO ZERO by patrol commander 'Andy McNab' became an international bestseller, as did the book by 'Chris Ryan' (THE ONE THAT GOT AWAY). Both men became millionaires. Three members of the patrol were killed. One, veteran sergeant Vince Phillips, was blamed in both books for a succession of mistakes.

As Michael Asher reveals, the stories in BRAVO TWO ZERO and THE ONE THAT GOT AWAY grew considerably in the telling. Their heroic tales of taking out tanks with their rocket launchers, mowing down hundreds of Iraqi soldiers, the silent stabbing of the occasional sentry, were never mentioned at their post-war debriefings... In an investigation literally in the footsteps of the patrol, Michael Asher tells the true story.

THE REAL BRAVO TWO ZERO is now in the top 10 bestseller list and has received a brilliant review in FRONT MAGAZINE: 'Asher reveals fact from fiction and gives the full, no-bullshit account of what actually happened. Superbly written and researched, this is a gem of recent military history that shouldn't bemissed.' FRONT MAGAZINE, April 03 'Michael Asher, ex-SAS man and desert specialist discovered some glaring inconsistencies in the best-selling Gulf War books by Andy McNab and Chris Ryan. Retracing their steps across the Iraqui desert, Asher pieces together what really happened. Far from the supposed heroics of the now-millionaire writers, he tells of McNab's botched planning, poorleadership and a sorry attempt to pin the blame on a dead patrol member. Thewhole truth is very difficult to know, but this is a timely and humane book nevertheless.'JACK magazine, April 03 'The classic international best-seller now in paperback. What really happened when the now famous eight-man SAS patrol went behind enemy lines in the Gulf War? This really is the true story of the SAS operation that made millionaires of the two men in the patrol... Intelligence sources say this is a powerful 'expose' of the men called 'McNab' and 'Ryan'.'EYE SPY Vol II, issue 16, 2003 'SAS Trooper Michael Asher's powerful re-telling of the truth behind Bravo Two Zero and The One That Got Away raises serious questions as to how tall were these two tales in the first place.Asher, a Fellow of the Royal Society of Literature and fluent Arabic speaker, describes how he follows literally in the footsteps of the famous patrol. We are also asked how gullible are we and also how credible is Asher. The conclusions either way are disturbing.' * * * * SCOTTISH LEGION NEWS, April/May 20

Michael Asher served in the Parachute Regiment and SAS. A fluent Arab speaker, he has lived for years among the Bedouin peoples. He is a Fellow of the Royal Society of Literature, his published books include SHOOT TO KILL (1990), THESIGER: A BIOGRAPHY (1994) and an acclaimed biography of Lawrence of Arabia. His THE REAL BRAVO TWO ZERO (2002) was a Sunday Times Top 10 best seller.

GOR000378528
The Real Bravo Two Zero by Michael Asher
Michael Asher
Used - Very Good
Paperback
Orion Publishing Co
2003-02-13
272
0304365548
9780304365548
N/A
Book picture is for illustrative purposes only, actual binding, cover or edition may vary.
This is a used book - there is no escaping the fact it has been read by someone else and it will show signs of wear and previous use. Overall we expect it to be in very good condition, but if you are not entirely satisfied please get in touch with us.