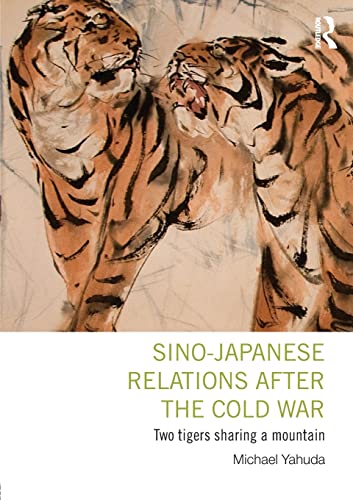 Sino-Japanese Relations After the Cold War
by Michael B. Yahuda

Sino-Japanese Relations After the Cold War: Two Tigers Sharing a Mountain by Michael B. Yahuda

Since the end of the Cold War China and Japan have faced each other as powers of relatively equal strength for the first time in their long history. As the two great powers of East Asia the way they both compete and cooperate with each other and the way they conduct their relations in the new era will play a big part in the evolution of the region as a whole.

This textbook explores in detail the ways in which politics has shaped the thinking about history and identity in both China and Japan and explains the role political leadership in each country has played in shaping their respective nationalisms. Michael Yahuda traces the evolution of the relationship over the two decades against the framework of a rising China gaining ground on a stagnant Japan and analyzes the politics of the economic interdependence between the two countries and their cooperation and competition in Southeast Asia and in its regional institutions.

Concluding with an examination of the complexities of their strategic relations and an evaluation of the potentialities for conflict and co-existence between the two countries, this is an essential text for students and scholars of Sino-Japanese and East Asian International Relations.

'Michael Yahuda's Sino-Japanese Relations After the Cold War: Two tigers sharing a mountain fills a persistent need for a solid textbook on Asia's most important bilateral relationship. It is comprehensive in its scope, lucid in its conclusions, well balanced in its treatment of both history and new strategic realities, and always eminently readable.' - Richard Bush, The Brookings Institution, USA

'During the first two decades following the normalization of Sino-Japanese relations in the early 1970s, Japan and China managed to maintain amicable ties in spite of a relative lack of economic engagement and human exchanges. Since the early 1990s, however, the growing interdependence of the two countries has also been marked by underlying tensions and serious disputes as a long-term power shift from Japan to China occurs. Dr. Yahuda, a leading authority in the field, offers us a cogent and dispassionate analysis of the ways in which these two tigers can learn to share the same mountain.' - Ryosei Kokubun, President, National Defense Academy of Japan

'How can two tigers learn to share the same mountain? This is the key question Professor Michael Yahuda tries to answer his brilliant book. Among its strengths are its historic approach, which proves very useful for understanding the evolution of China-Japan relations, and its attempt to cover all areas (such as economy, international institutions, and strategic fora) in which the two countries interact.' Claudia Astarita, The International Spectator

About Michael B. Yahuda

Preface Introduction: Sino-Japanese Relations After the Cold War: Two Tigers Sharing the Same Mountain 1. Politics of History and Identity: From the Mao era to the early reform period of the 1980s 2. The Post Cold War Transformation: The 1990s 3. China's Rise and Japan's Decline 2000-2012 4. The Politics of Sino-Japanese Economic Interdependence 5. Partnership and Rivalry in Regional Institutions 6. Strategic Rivalry Conclusion: Looking Ahead

GOR010211139
Sino-Japanese Relations After the Cold War: Two Tigers Sharing a Mountain by Michael B. Yahuda
Michael B. Yahuda
Used - Like New
Paperback
Taylor & Francis Ltd
2013-09-12
160
0415843081
9780415843089
N/A
Book picture is for illustrative purposes only, actual binding, cover or edition may vary.
The book has been read, but looks new. The book cover has no visible wear, and the dust jacket is included if applicable. No missing or damaged pages, no tears, possible very minimal creasing, no underlining or highlighting of text, and no writing in the margins.