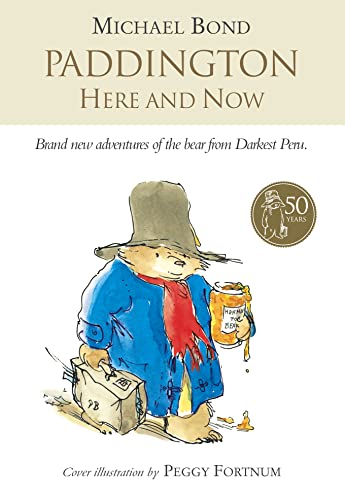 Paddington Bear always manages to find himself in tricky situations, sometimes extraordinary situations. Like the time he had a difficult encounter with a policeman or when he found himself in deep water with a newspaper reporter. But since arriving from his native Peru after an earthquake Paddington has always felt at home with the Brown family who found him on Paddington station. Then one day, a surprise visitor arrives at thirty-two Windsor Gardens. Is it time for Paddington to decide where 'home' really is?

In 2008 Michael Bond's first novel featuring the adventures of Paddington Bear will celebrate its fiftieth anniversary. Paddington's amazing ability to get into and out of trouble is at the heart of the countless stories that have been loved the world over ever since. However, it is many years since a new novel has been published, and in celebration of this landmark, Michael Bond has written the funniest and the most moving Paddington novel ever.

GOR001025629
Paddington Here and Now by Michael Bond
Michael Bond
Used - Very Good
Hardback
HarperCollins Publishers
2008-06-02
176
0007269404
9780007269402
Short-listed for Roald Dahl Funny Prize: The Funniest Book for Children Aged Seven to Fourteen 2008 Short-listed for Independent Booksellers' Week Book of the Year Award: Children's Book of the Year 2008
Book picture is for illustrative purposes only, actual binding, cover or edition may vary.
This is a used book - there is no escaping the fact it has been read by someone else and it will show signs of wear and previous use. Overall we expect it to be in very good condition, but if you are not entirely satisfied please get in touch with us.