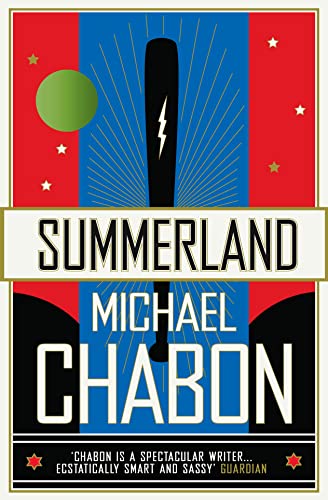 An unforgettable novel for children from one of America's greatest living storytellers, SUMMERLAND is about redemption and the true nature of heroism.

An unforgettable novel for children from one of America's greatest living storytellers, SUMMERLAND is about redemption and the true nature of heroism.

Ethan is a young hero on a quest though the strange world of American Faery. Since baseball is the favourite game of American fairies, or `ferishers' as the North American Fairy Folk call themselves, this is necessarily a story of baseball, too. Zeppelins, werefoxes, Indians and Indian mythology, sasquatches, wendigos, Alaska, the haunted 161-year-old husk of George Armstrong Custer, and a boy who thinks he's an android, also figure in the action. Along the way, the hero and heroine find themselves and each other; a band of ferishers triumphs over their ancient enemy and finally find someone new to play baseball against; a widower's heart will heal as his airship conquers the northern sky; and a burned-out Colombian slugger named Rodrigo Buendia will find redemption in discovering, with Ethan Feld and Jennifer T. Rideout, the true nature of heroism.

`Chabon's quirky, fluent style holds no hint of condescension and is sprinkled with wry remarks that will delight the young teenager.' Daily Telegraph

`Perhaps the surest sign of "Summerland's success is how the language of Chabon's fictional universe stays with you and the way he achieves a sweet genuinely affecting ending.' Time Out

Praise for `The Yiddish Policemen's Union':

`His almost ecstatically smart and sassy new novel...Chabon is a spectacular writer...a language magician. He has you laughing out loud, applauding the fun he has with language and the way he takes the task of a writer and runs delighted rings around it.' Guardian

`Michael Chabon's brilliant new novel starts with a bang...It hums with humour. It buzzes with gags...the accumulated reading experience is one of admiration, close to awe, at the vigour of Chabon's imagination...a hilarious, antic whirl of a novel.' Sunday Times

GOR001049202
Summerland by Michael Chabon
Michael Chabon
Used - Very Good
Paperback
HarperCollins Publishers
2003-07-31
512
000712712X
9780007127122
N/A
Book picture is for illustrative purposes only, actual binding, cover or edition may vary.
This is a used book - there is no escaping the fact it has been read by someone else and it will show signs of wear and previous use. Overall we expect it to be in very good condition, but if you are not entirely satisfied please get in touch with us.