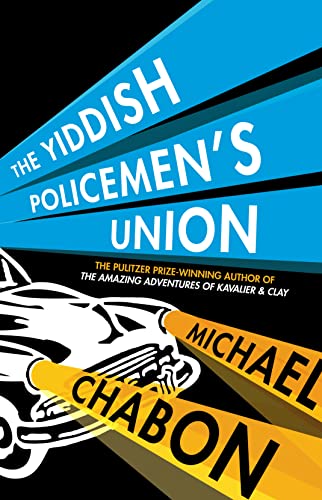 The brilliantly original new novel from Michael Chabon, author of the Pulitzer prize-winning `The Adventures of Kavalier and Clay'

The brilliantly original new novel from Michael Chabon, author of the Pulitzer prize-winning `The Adventures of Kavalier and Clay'

For sixty years Jewish refugees and their descendants have prospered in the Federal District of Sitka, a 'temporary' safe haven created in the wake of revelations of the Holocaust and the shocking 1948 collapse of the fledgling state of Israel. Proud, grateful and longing to be American, the Jews of the Sitka District have created their own little world in the Alaskan panhandle, a vibrant, gritty, soulful and complex frontier city that moves to the Yiddish beat. Now, after sixty years of federal neglect, the District is set to revert to Alaskan control, and their dream is coming to an end: once again the tides of history threaten to sweep them up and carry them off into the unknown.

But homicide detective Meyer Landsman has enough problems without worrying about the upcoming Reversion. His life is a shambles, his marriage a wreck, his career a disaster. He and his half-Tlingit partner, Berko Shemets, can't catch a break in any of their outstanding cases. Landsman's new supervisor is the love of his life - and also his worst nightmare. And then someone's got the nerve to commit a murder in the flophouse Landsman calls home. Out of habit, obligation and a half-cocked shot at redemption, he begins to investigate the killing of his neighbor, a former chess prodigy, and soon finds himself contending with all the powerful forces of faith, obsession, evil and salvation that are his heritage - and with the unfinished business of his marriage to Bina Gelbfish, the one person who understands his darkest fears.

At once a gripping whodunit, a love story, an homage to 1940s noir, and an exploration of the mysteries of exile and redemption, "The Yiddish Policemen's Union" is a novel only Michael Chabon could have written.

'This is a master storyteller at work, a stylish noir-esque murder mystery interwoven with pathos, wit, and the grasp of descriptive metaphor that make one swallow hard to keep from shouting with joy. Michael Chabon illuminates and invites discussion while his meticulous plotting and scintillating characters create an alternate world that compels belief...confirms Chabon's status as one of the truly great living American writers.' Waterstones Books Quarterly

`His almost ecstatically smart and sassy new novel...Chabon is a spectacular writer...Chabon is a language magician, turning everything into something else just for the delight of playing tricks with words...Chabon's ornate prose makes (Raymond) Chandler's fruity observations of the world look quite plain...He writes like a dream and has you laughing out loud, applauding the fun he has with language and the way he takes the task of a writer and runs delighted rings around it.' Guardian

`Michael Chabon's brilliant new novel starts with a bang...It hums with humour. It buzzes with gags...Superb images also team in this long novel: the accumulated reading experience is one of admiration, close to awe, at the vigour of Chabon's imagination...a hilarious, antic whirl of a novel.' Sunday Times

`Chabon is masterly at evoking reality through smells and rises to the challenge of differentiating his "black hat" (Orthodox) characters with precise descriptions of beards.' Observer

`His talent is undisputable. Chabon's novels are warm, witty, a little whimsical, always beautifully written. He is that rare and precious beast: a literary writer with crossover appeal and a proper engagement with the demotic...Funny, touching and compelling, the novel transcends the limitations of all its genres - which is pretty much Chabon's MO...a stunning achievement...If the film's half as fun as the book, we'd have a hit on our hands. Hell, there's even a car chase.' GQ

GOR001391770
The Yiddish Policemen's Union by Michael Chabon
Michael Chabon
Used - Very Good
Hardback
HarperCollins Publishers
2007-06-04
432
0007150393
9780007150397
Winner of Hugo Award: Novel Category 2008
Book picture is for illustrative purposes only, actual binding, cover or edition may vary.
This is a used book - there is no escaping the fact it has been read by someone else and it will show signs of wear and previous use. Overall we expect it to be in very good condition, but if you are not entirely satisfied please get in touch with us.