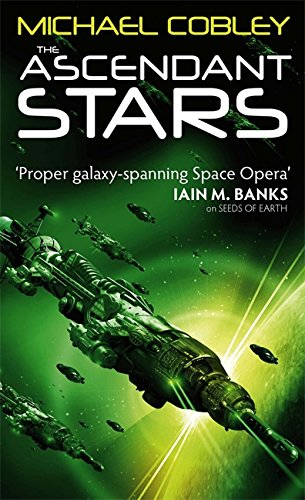 The Ascendant Stars
by Michael Cobley

Darien's future hangs in the balance as conflict rages across the planet's surface and, in the skies above, interstellar power politics has turned to war.

Their allies circle above Darien and their armies are rising from below as an ancient battle is about to recommence. Machine vs human. Life or the sterile dusts of space.

Michael Cobley was born in the city of Leicester, has lived in Perth (Australia) and Glasgow but now resides in North Ayrshire. His previous works have included the Shadowkings trilogy (a dark and grim fantasy epic), Iron Mosaic (a collection of short stories) but he is best known for his epic space opera series - Humanity's Fire. Splintered Suns is a stand alone adventure set in this universe.

GOR004346621
The Ascendant Stars: Book Three of Humanity's Fire by Michael Cobley
Michael Cobley
Humanity's Fire
Used - Very Good
Paperback
Little, Brown Book Group
2012-07-31
640
1841496367
9781841496368
N/A
Book picture is for illustrative purposes only, actual binding, cover or edition may vary.
This is a used book - there is no escaping the fact it has been read by someone else and it will show signs of wear and previous use. Overall we expect it to be in very good condition, but if you are not entirely satisfied please get in touch with us.