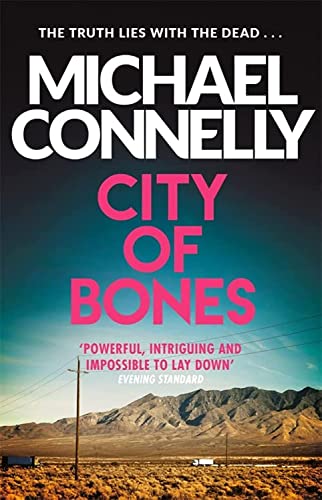 City Of Bones
by Michael Connelly

Used Price
£3.99
New RRP £8.99
Free Shipping in the UK
When the bones of a young boy are found, Harry is drawn into a case that brings up dark memories. The outstanding eighth Harry Bosch thriller from the award-winning No. 1 bestselling author of The Lincoln Lawyer. City of Bones is featured in Amazon Prime's BOSCH TV series.
Reviews:
Trustpilot
Very Good Good Well Read

City Of Bones by Michael Connelly

The outstanding eighth Harry Bosch thriller from the award-winning No. 1 bestselling author of The Lincoln Lawyer. City of Bones is featured in Amazon Prime's BOSCH TV series.

When the bones of a boy are found scattered in the Hollywood Hills, Harry Bosch is drawn into a case that brings up dark memories from his past.

Unearthing hidden stories, he finds the child's identity and reconstructs his fractured life, determined that he won't be forgotten. At the same time, a new love affair with a female cop begins to blossom - until a stunningly blown mission leaves him in more trouble than ever before. The investigation races to a shocking conclusion and leaves Bosch on the brink of an unimaginable decision . . .

Michael Connelly writes assured, well-plotted mysteries that hit all the right buttons ... CITY OF BONES is altogether a good, fast-paced, ingeniously plotted read * OBSERVER *
One of Connelly's best books ... Characterisation sharp enough to draw blood; excitements of the heart and mind; crime fiction at its aching, impeccable best * LITERARY REVIEW *
A stunningly good novel: powerful, intriguing and impossible to lay down - perhaps, indeed, the best of the series * EVENING STANDARD *
Slick plotting, far-from-gratuitous thrills, a breakneck pace and superb characteisation have always typified Michael Connelly's novels about the dark side of California. CITY OF BONES, which sees the return of Detective Harry Bosch, proves no exception * GUARDIAN *
[A] taut thriller from the award-winning author ... It's realistic, riveting and first-rate * HELLO *
A remarkable achievement: a page-turning thriller that rejects easy answers or feelgood endings, a crime novel which points out that solving a crime does not in itself even begin to set the world to rights * MAIL ON SUNDAY *
Packed with Connelly's memorable twists and turns ... emotionally wrenching, yet never lacking the compassion that Bosch has come to symbolise, CITY OF BONES will delight Connelly's millions of fans and should - if there is any justice in the world (which Bosch doubts) - win him a great many more * DAILY MAIL *
Connelly is, in my view, simply the best crime thriller writing working today and in CITY OF BONES he is on top form * MAIL ON SUNDAY *
Michael Connelly just has to be the best writer of crime fiction about at the moment * IRISH TIMES *

GOR006886392
City Of Bones by Michael Connelly
Michael Connelly
Harry Bosch Series
Used - Very Good
Paperback
Orion Publishing Co
2014-11-06
432
1409155730
9781409155737
Winner of Anthony Award for Best Paperback Original 2003 (UK)
Book picture is for illustrative purposes only, actual binding, cover or edition may vary.
This is a used book - there is no escaping the fact it has been read by someone else and it will show signs of wear and previous use. Overall we expect it to be in very good condition, but if you are not entirely satisfied please get in touch with us.