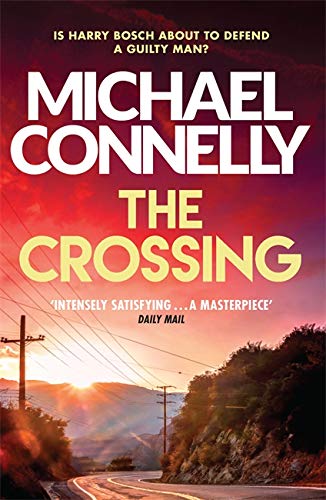 The Crossing
by Michael Connelly

In Stock
£3.59
Can Harry Bosch defend a man accused of murder without betraying everything he believes in?
Very Good Good Well Read
48 in stock

The Crossing by Michael Connelly

Six months ago, Harry Bosch left the LAPD before they could fire him, and then hired maverick Defense Attorney Mickey Haller to sue the department for forcing him out. Although it wasn't the way he wanted to go, Harry has to admit that being out of the game has its benefits. Until Mickey asks him to help on one of his cases, and suddenly Harry is back where he belongs, right in the centre of a particularly puzzling murder mystery. The difference is, this time Harry is working for the defense, aiming to prevent the accused, Da'Quan Foster, from being convicted. And not only does the prosecution seem to have a cast-iron case, but having crossed over to 'the dark side' as his former colleagues would put it, Harry is in danger of betraying the very principles he's lived by his whole career.

Enter Harry Bosch, one of the finest minds in crime fiction. He understands the trajectories of bullets and also political careers. Connelly loves to watch him think, and so do I. * EVENING STANDARD *
Fast detective action is skilfully interwoven with courtroom pyrotechnics. * THE INDEPENDENT *
It's jaw-dropping that after 27 bestsellers he's still scaling new heights with every book, and this one is a double delight because it features both detective Harry Bosch and his half-brother, ducking and diving defence lawyer Mickey Haller. * PETERBOROUGH EVENING TELEGRAPH *
Vintage Bosch -- Mark Billingham * CRIME VAULT PODCAST *
As ever, Connelly's produced a solid police procedural, gripping right to the end. -- Mat Coward * MORNING STAR *
Intensely satisfying and featuring two of the smartest creations in modern crime fiction, this is as elegant a masterpiece as Connelly has delivered. * DAILY MAIL *
When Michael Connelly is on form, as he is with The Crossing, he is irresistible. * IRISH TIMES *
Connelly spins an intricate web in this brilliant anti-police procedural. * DAILY EXPRESS *
Michael Connelly justified the stellar success of his Harry Bosch stories by breathing new life into the series in its 18th instalment THE CROSSING. * DAILY EXPRESS *
All sorts of lines are crossed in a brilliant and complex story set against the parched paradise of Los Angeles. * EVENING STANDARD *

GOR007813683
The Crossing by Michael Connelly
Michael Connelly
Harry Bosch Series
Used - Very Good
Paperback
Orion Publishing Co
2016-10-06
432
1409145875
9781409145875
Winner of CrimeFest Kobo eDunnit Award 2016
Book picture is for illustrative purposes only, actual binding, cover or edition may vary.
This is a used book - there is no escaping the fact it has been read by someone else and it will show signs of wear and previous use. Overall we expect it to be in very good condition, but if you are not entirely satisfied please get in touch with us.